The Cross Art Projects is a not-for-profit curatorial initiative founded by Jo Holder in September 2003 and run by a small group of independent curators. In late 2009 we moved to 8 Llankelly Place after working at 33 Roslyn Street in Kings Cross in tandem with The Cross Books. The old space continues as a curator run-space with changing formats every two years. (Formerly The Drawing Room now Affiliated Text).

Manifesto: The Cross Art Projects foregrounds contemporary work that reflects the multiple relationships between art and life, art and the public sphere and explores the boundaries of this context. We are attentive to the local without sacrificing the scope of an international view. The Cross Art Projects presents curated exhibitions and work by artists who create critical projects that question and/or reflect our present circumstances and whose work has a rigorous conceptual foundation. Projects are enhanced with conversations and round-tables by local activist, architectural and heritage groups.

We acknowledge and respect all Traditional Owners & Custodians on whose Lands we live, work and travel through, in Australia and overseas.

Jo Holder founded The Cross Art Projects, Sydney in 2003 to advance equity and social justice issues. She is co-convenor of Contemporary Art and Feminism in collaboration with Jacqueline Millner and Catriona Moore and Future Feminist Archive (across regional NSW, 2015–16 and Archive Live! at Wollongong City Gallery, 2019). At The Cross Art Projects she has contributed Witnessing the Intervention, a series of exhibitions on the Federal Intervention into Indigenous communities and the counter argument for “Voice Treaty Truth” (co-curated with Djon Mundine); Mining and Climate projects including Particulate Matter: A fossil fuelled future? (2020); and the exchange project Elastic: Darwin<>Sydney<>Dili (2014, NCCA Darwin and Sydney). Social history projects include Re/construction a rereading of Jack Mundey and the 1970s Green Bans Movement (2020, with Sydney Trades Hall) and Green Bans Art Walk (2011, Performance Space, Sydney). Jo Holder has held key curatorial roles in the public and independent sectors as director S.H. Ervin Gallery, Sydney and published several books on contemporary visual art and culture.

Contact Jo Holder, 0406 537 933, This email address is being protected from spambots. You need JavaScript enabled to view it.

Djon Mundine OAM is a proud Bandjalung man from the Northern Rivers of New South Wales.  Mundine is a curator, writer, artist and activist and is celebrated as a foundational figure in the criticism and exhibition of contemporary Aboriginal art. Mundine has held many senior curatorial positions in both national and international institutions, some of which include the National Museum of Australia, the Museum of Contemporary Art, Art Gallery of New South Wales and Campbelltown Art Centre. Between the years 1979 and 1995, Mundine was the Art Advisor at Milingimbi and curator at Bula-bula Arts in Ramingining, Arnhem Land for sixteen years. Mundine was also the concept artist/ producer of the ‘Aboriginal Memorial’, comprising 200 painted poles by forty-three artists from Ramingining, each symbolising a year since the 1788 British invasion. The Memorial was central to the 1988 Biennale of Sydney and remains on permanent display at the National Gallery of Australia in the main entrance hall. In 1993, Mundine received the Medal of the Order of Australia for service to the promotion and development of Aboriginal arts, crafts and culture. Between 2005 & 2006 Mundine was resident at the National Museum of Ethnology (Minpaku) in Osaka, Japan as a Research Professor in the Department of Social Research and is a PhD candidate at National College of Art and Design, University of NSW. Djon Mundine OAM also won The Australia Council’s 2020 Red Ochre Award for Lifetime Achievement and is currently an independent curator of contemporary Indigenous art and cultural mentor.

Contact Djon Mundine, This email address is being protected from spambots. You need JavaScript enabled to view it. or https://www.djonmundine.com/

Jasmin Stephens is an independent curator and lecturer in curatorial studies and contemporary art in Asia. Following senior positions with Artbank, the Museum of Contemporary Art Australia and Fremantle Arts Centre, Jasmin has pursued a context-responsive practice since 2011. In this capacity she has facilitated programming by institutions and led by artists across Australia and in Singapore, Taiwan and Thailand. Recent exhibitions include Composing Archipelagos, Contemporary Art Tasmania, Hobart (2021); The essayist, The Cross Art Projects, Sydney (2019); Diagrammatic: Works by Lucas Ihlein and Collaborators, Deakin University, Melbourne (2018); Our Studio Selves, Artspace, Sydney (2017); and Artists as Cartoonists or Extended Black and White: Raquel Ormella, The Cross Art Projects, Sydney (2016). Living in Sydney, Stephens is a sessional academic at UNSW Art & Design where she is a Scientia PhD researcher. She also works with artists and curators as a researcher and a strategist. She has been an associate of The Cross Art Projects since 2013.

Contact Jasmin Stephens, 0437 782 720, This email address is being protected from spambots. You need JavaScript enabled to view it.

Proposals for exhibitions are invited from professional curators and should be consistent with the gallery’s curatorial policy with work of the highest quality.

Priority will be given to proposals for exhibitions which:
•    Represent new works at the forefront of artistic practice both in Australia and overseas
•    Are innovative and reflect issues of current critical interest
•    Promote inter-cultural exchange
•    Provide opportunities for collaborations with other cultural organisations, funding agencies and sponsors.

Curatorial submissions: are reviewed every 3 months.

The new space in Llankelly laneway. 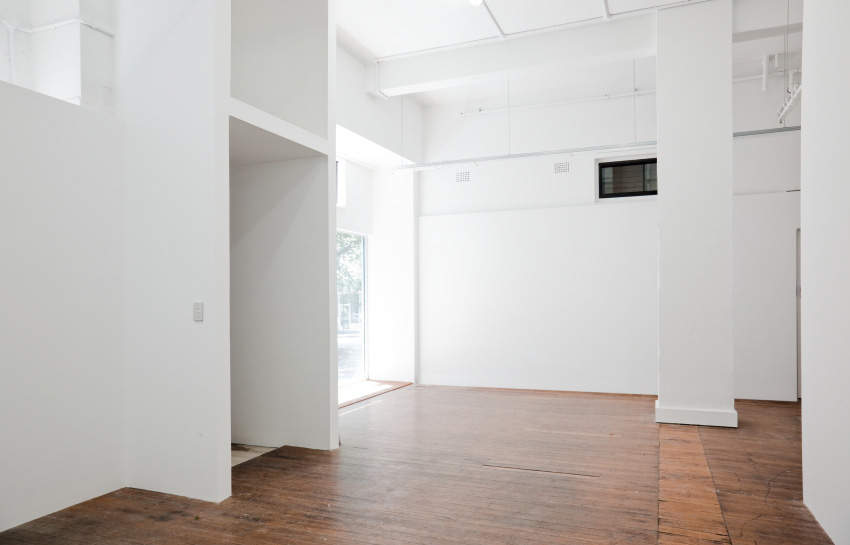 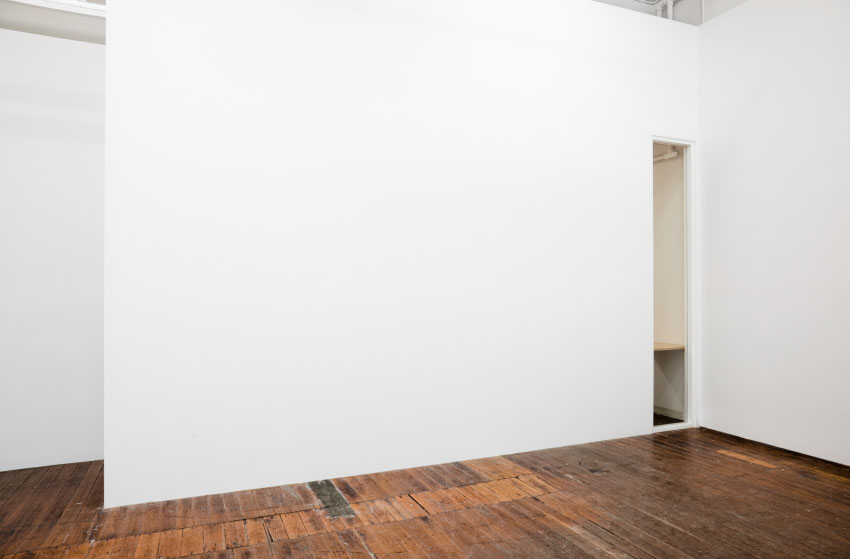 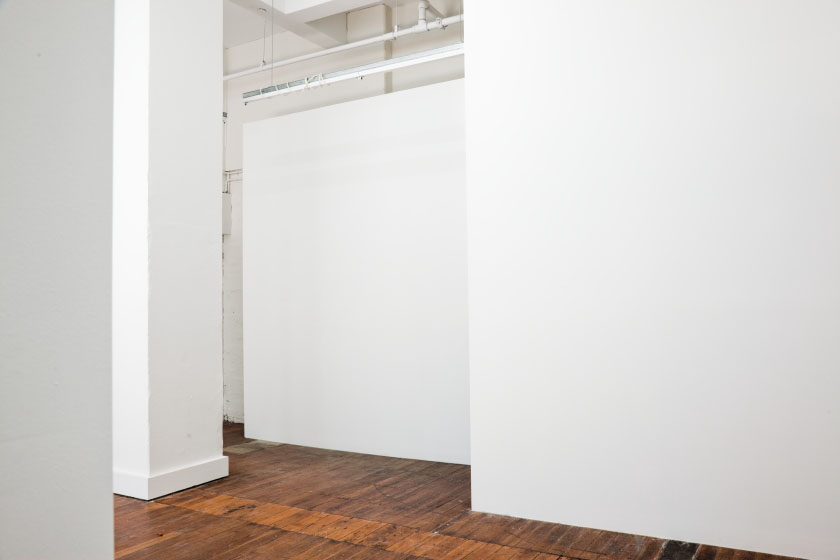 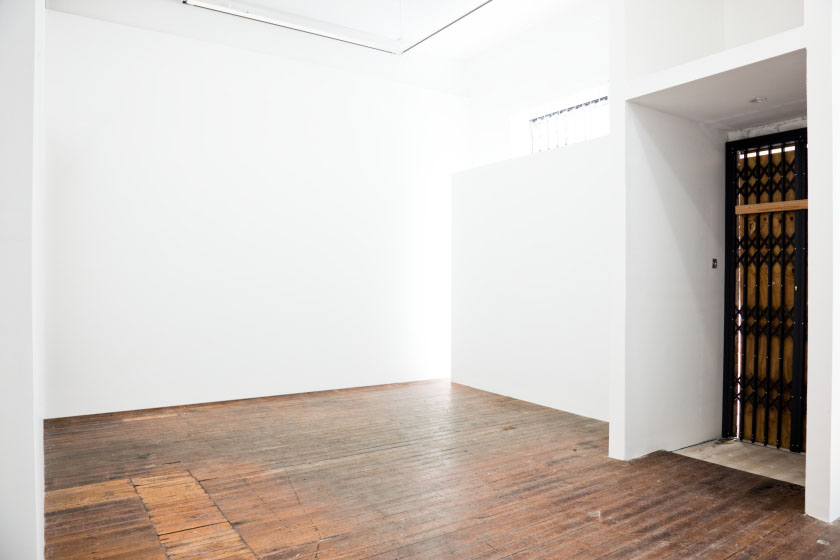 This laneway is part of a Heritage Conservation Area renowned for its Art Deco architecture. The Cross Art Projects is located in Cahors a State Heritage Listed residential flat building. (Architects Joseland and Gilling, 1939.)

Nearby are other significant local residential flat buildings: Walmur by Emil Sodersten, Regents Court and Sandringham by Claud Hamilton, Gowrie Gate by Dudley Ward and Franconia by Leslie Nelisen who also designed the west side of Springfield Avenue (State Heritage Register). The reigning architectural glory is the Minerva (now Metro) Theatre and 2KY Radio building by Bruce Delit.

Narrow Llankelly Lane (6 metres across) links these special places and buildings. The lane was dignified with the name 'Llankelly Lane' in 1922, was renamed 'Llankelly Place' in the late 1980s after City Council acquired privately owned sections of the laneway, Springfield Avenue (renamed Springfield Mall) and garages on Orwell Street to create Springfield Gardens. The Mayor Doug Sutherland opened the gardens in 1986 (plaque).

In 2000-2003 architect Peter McGregor redesigned Llankelly Lane and Springfield Mall. His lightwork and pavements have become quiet local place markers and a sensitive evocation of a European style pedestrian lane. The lane is a special place, with a Local Recreation Reservation (Zoning Control No 9(c) South Sydney Council Local Environmental Plan 1998. Residents are fighting to protect the area's fine-grained residential and mixed commercial character, under threat from commercial 'activation' and a high rent monoculture.

Running along Llankelly laneway between Darlinghurst Road and Orwell Street in Kings Cross, are 11 suspended lights ('roundells'). The lightwork doesn't detract from the area's residential amenity: the colours are laid out in a spectrum array from red to yellow to green at the Springfield Gardens end.

There is a colour-coded transition: red lights mark the entrance off Darlinghurst Road; in the middle from orange to yellow; then green for the residential flat buildings where the lane meets the trees of Springfield Park on Orwell Street. Architect and artist Peter McGregor was inspired by nearby El Alamein Memorial Fountain. McGregor's design ensemble — lightwork, paving and the more subtle Springfield Mall—suggest the fine grain of interconnecting European lanes. Together they create a handsome addition to a Heritage Conservation landscape land link a lane to a public park. An active program dims each light on and off, at the average pace of a person walking — as the light sequence shifts from red near Darlinghurst Road to yellow then to green at the high density residential end of the lane. Artwork commissioned and installed by South Sydney Council in 2001.

Thanks to those who joined the "just fix the lights" case. After much investigating, reporting, tendering it is wonderful to see the lights home. The Llankelly lights were reinstated on 29 May 2013.

The Art Deco Society has called for the Kings Cross district to be declared an Area of National Significance. Over the twentieth century, artists and writers have celebrated neon as the colours of the street, from poet Kenneth Slessor’s Darlinghurst Nights (1933) to Baz Luhrmann’s film ‘Strictly Ballroom’ (1992). In 2004 a fierce local campaign saved the neons from being pushed into a "standard design template". After lobbying by the National Trust (NSW), Sydney City Council pronounced Darlinghurst Road "a unique neon precinct". Thanks Art Deco Society, National Trust and all heritage bods for the helping interventions. 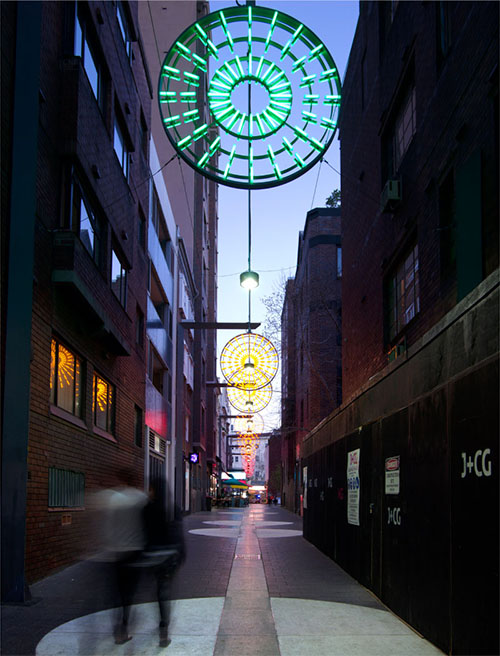 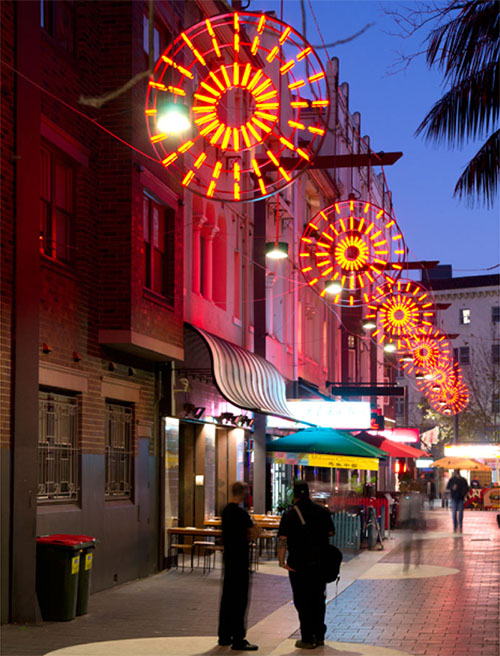