Zero Metres Above Sea Level presented an inter-tidal world of different cultures and sciences. It brought together artwork from two sites located at mean sea
level: Blue Mud Bay—a famous place in north East Arnhem Land, home to the respected yolngu clans, and Heron Island—a respected research station on the Great Barrier reef. Both centres are bastions of cultural, biological and scientific knowledge. Blue Mud Bay and its outstation estates represent one of the most pristine and culturally significant places in Australia. It is also historically famous for the High Court decision in 2008 to give Traditional owners exclusive rights over tidal waterways fringing Aboriginal land.

The sisters Marrnyula and Rerrkirrwana Munungurr assert Indigenous climate knowledge in the precise cross-hatching grid pattern of the sacred design on their bark paintings of the freshwaters of their homeland, Wandawuy, inland from Blue Mud Bay.

The grid refers to the landscape—a network of billabongs surrounded by ridges and high banks that flow to the bay. The grid structure references the woven fish traps used to scoop up fish that since ancestral times have fed the Yolngu people and wildlife. At another level, it references the spiritual residence for ancestral beings: Mäna the Shark and Bol’ngu the Thunderman. Wandawuy literally means ‘place of the Shark’s head’ in the larger context of the song cycles of Mäna’s journey.

Judy Watson and Marrnyula Munungurr have made fine print work from research residencies; Judy dedicated herself to studying the Great Barrier Reef in 2011 and both artists participated in Djalkiri: We are standing on their names—a cross-cultural project on environmental and botanical knowledge researched at Blue Mud Bay and curated by Darwin’s pioneering Nomad Art—which since 2013 became a national touring exhibition.

The Munungurr sisters’ bark paintings have strong affinities with Yirrkala Drawings, a sensational exhibition comprising a selection from 365 crayon drawings at the Berndt Museum in Perth. Marrnyula’s Larrakitj (painted pole) was one of the tributes from the artists’ descendants shown with the exhibition at the Art Gallery of NSW.

In different ways, these contemporary and historical projects raised concerns about climate emergency; tragically about 93 per cent of the reefs on Australia’s Great Barrier Reef have been affected by coral bleaching and almost a quarter of the reef on the 2300 km stretch is now dead. Coral has already experienced severe bleaching in every major reef region, from reefs around the Maldives and Western Australia, to the Pacific, theRed Sea and the Caribbean. In Arnhem Land, Yolngu sea rangers have photographed reefs bleaching and breaking where white coral has never been seen before.

Coral bleaches when water temperatures are a couple of degrees above the normal summer maximum for longer than about two weeks. Climate change has caused global sea surface temperatures to rise by approximately one degree celcius over the past century, pushing corals closer to their bleaching threshold. Strong El Niño effects, as well as other weather phenomena, raise the temperature further year by year.

Aboriginal and Torres Strait Islander people are disproportionately affected by climate change. Yet it is still difficult for stories of Indigenous climate knowledge to be heard. The Munungurr sisters’ thoughtful paintings and Judy Watson’s prints exist in plain view with this information.

In northern Australia, through native title and Indigenous land management programs, Aboriginal people are potentially responsible for managing 80 per cent of the area’s unique environment. All targeted responses to climate change in this region must work with this knowledge, based on thousands of years of experience, to find pathways to both adaptation and mitigation. 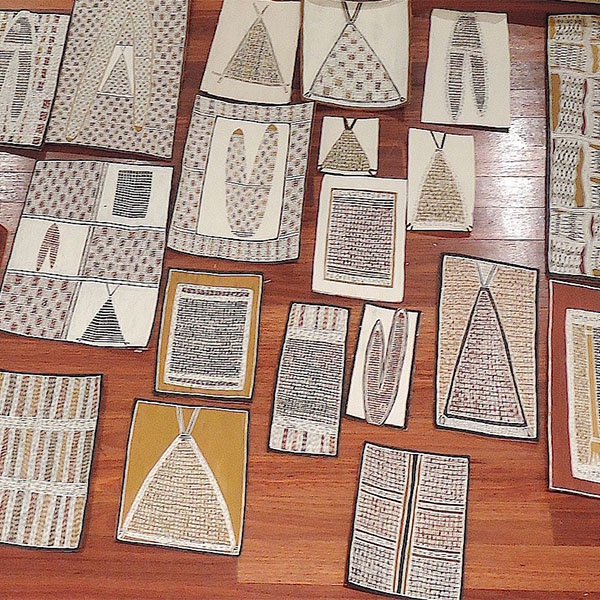 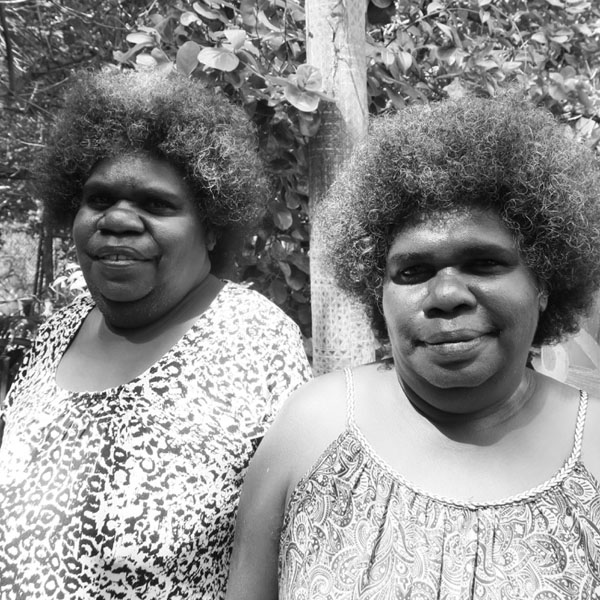 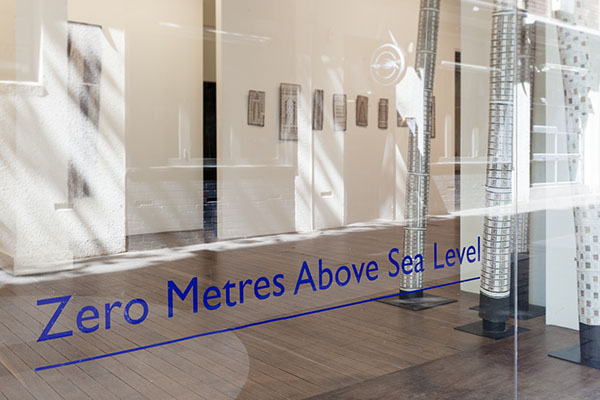 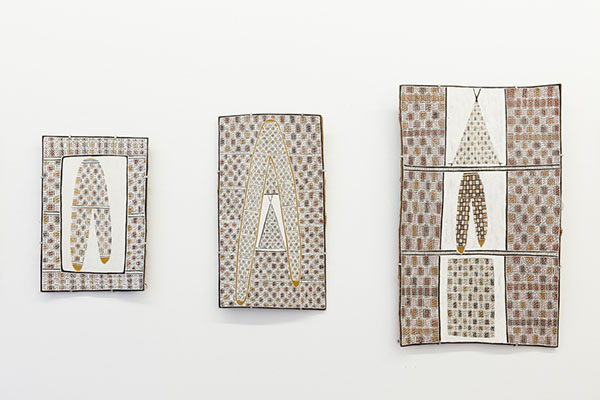 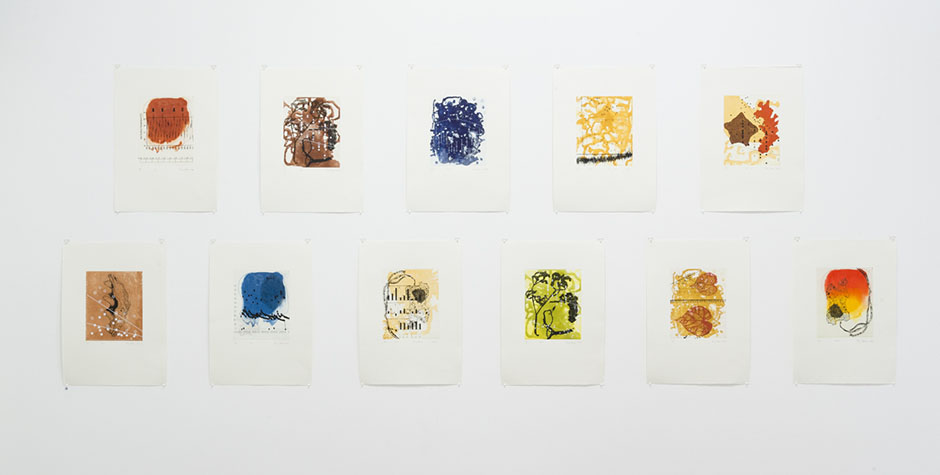 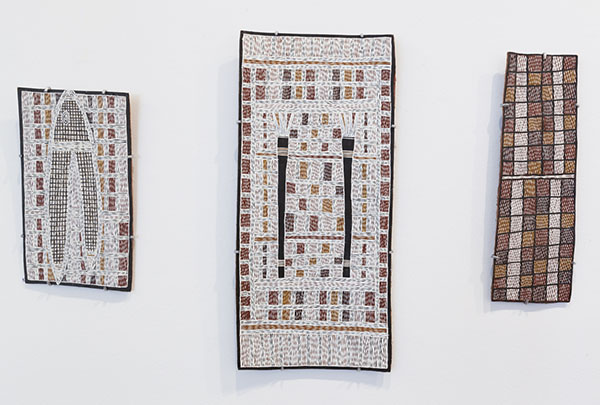 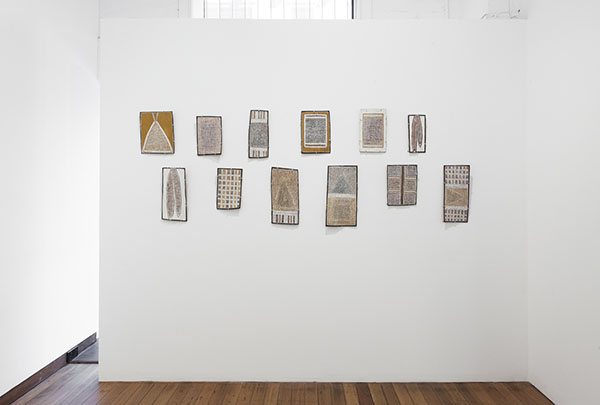 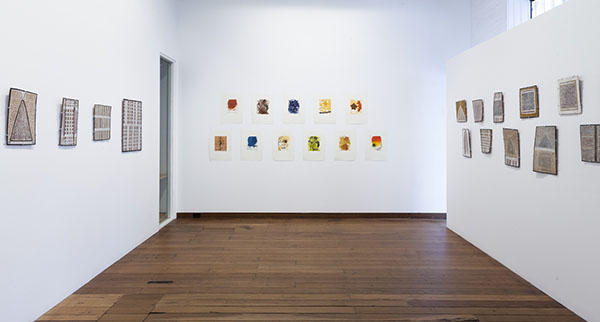 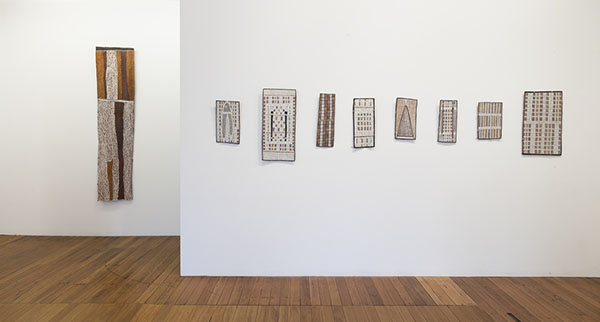 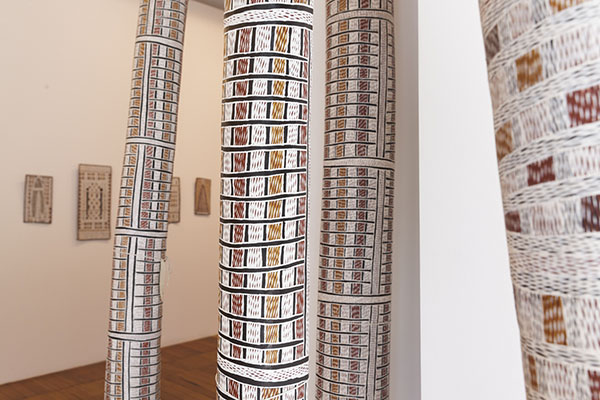 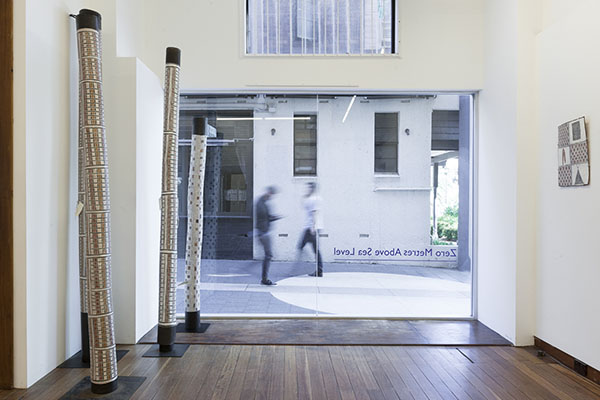 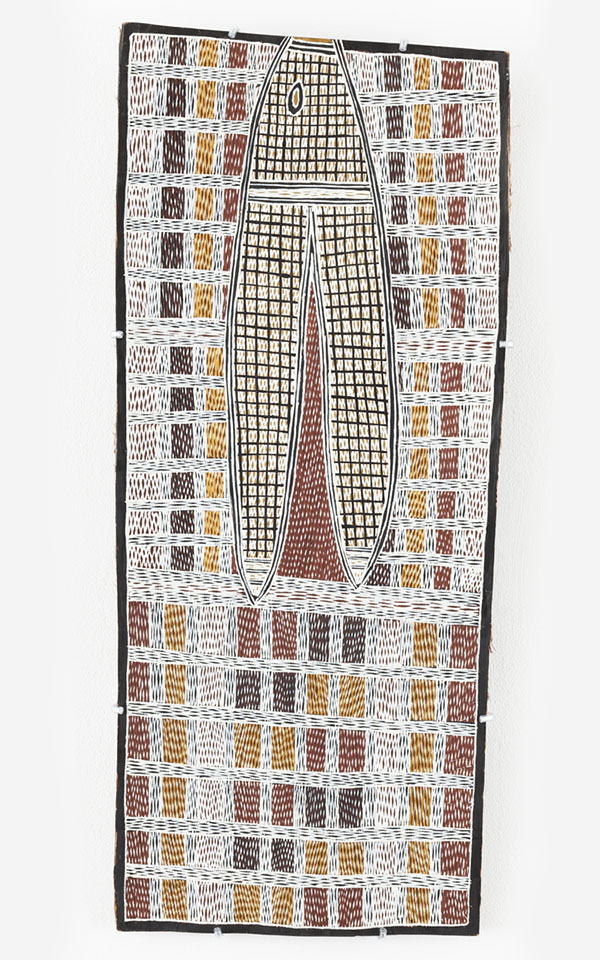 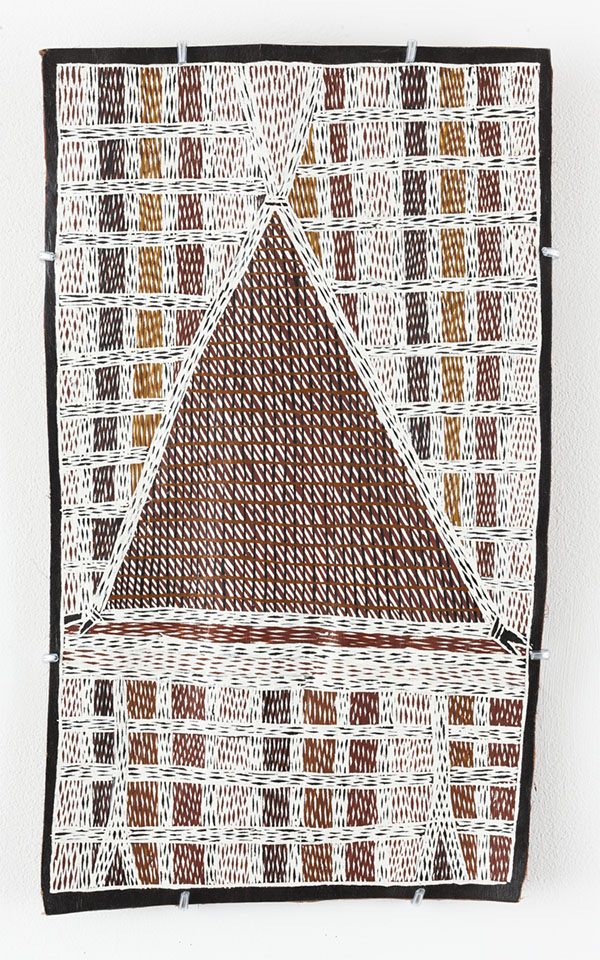 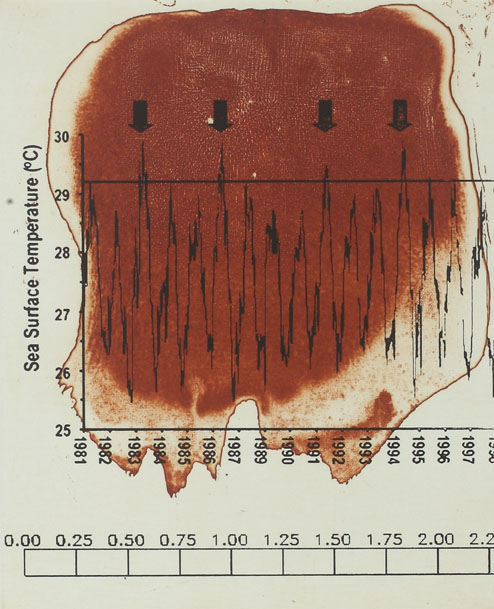 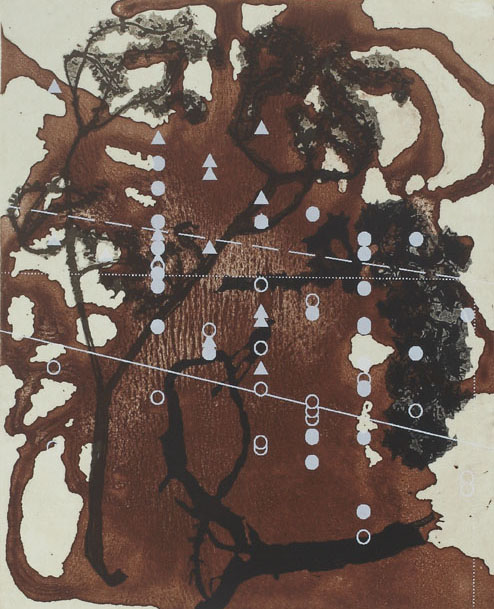 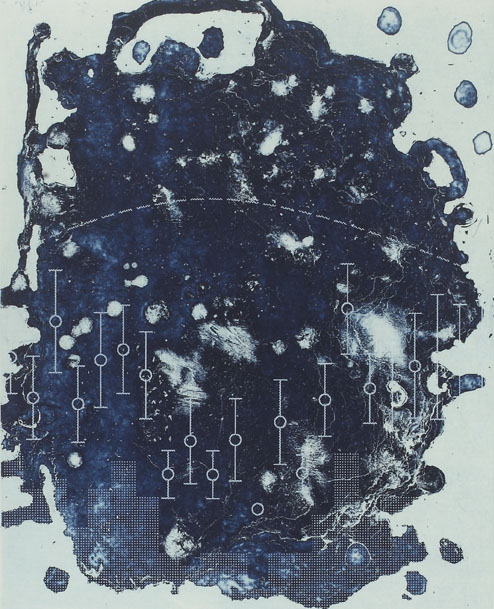 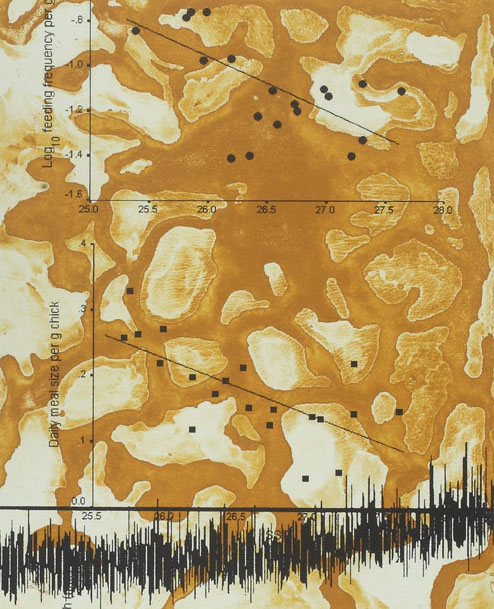 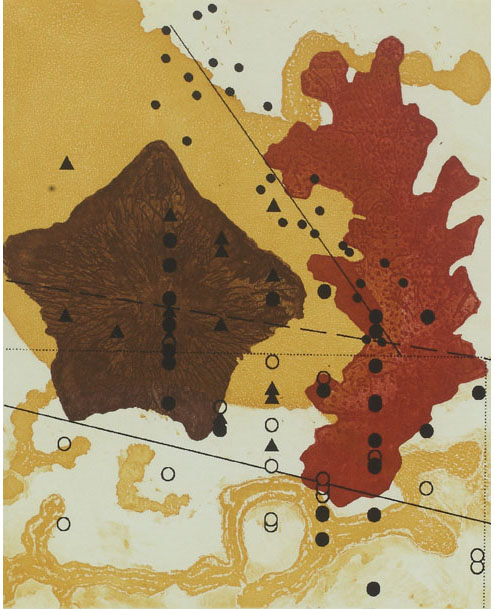 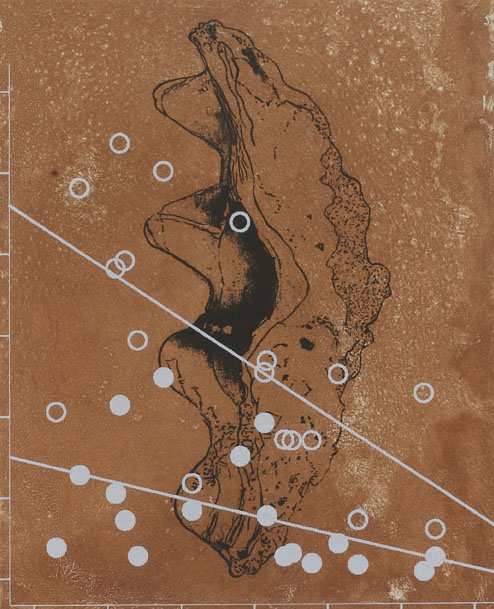 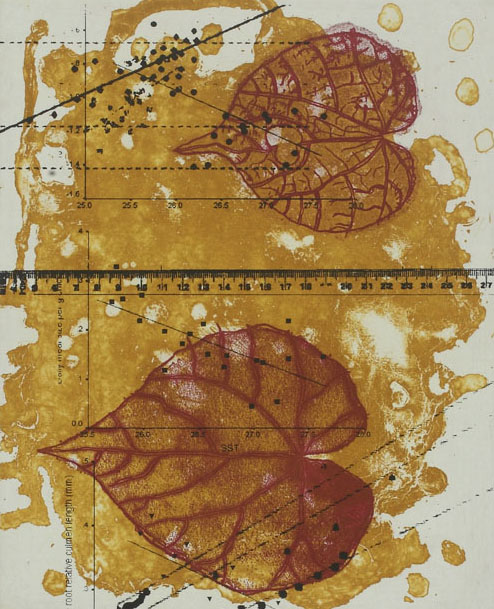 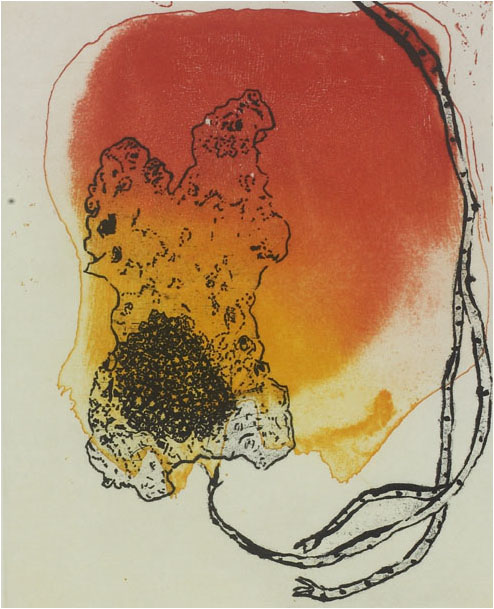 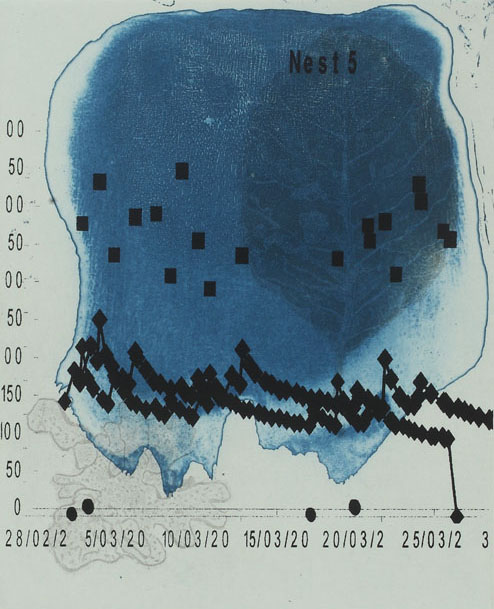 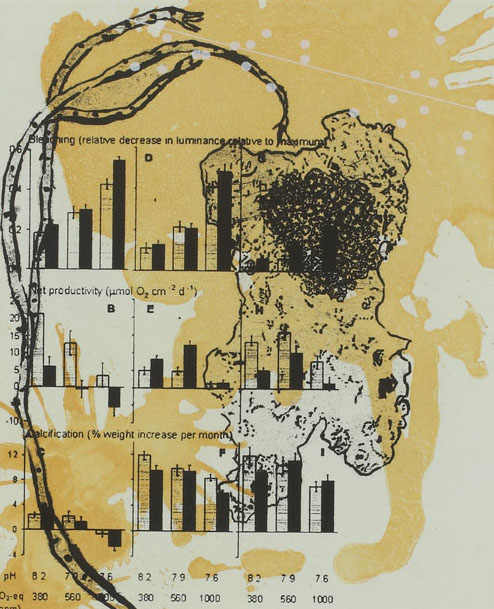 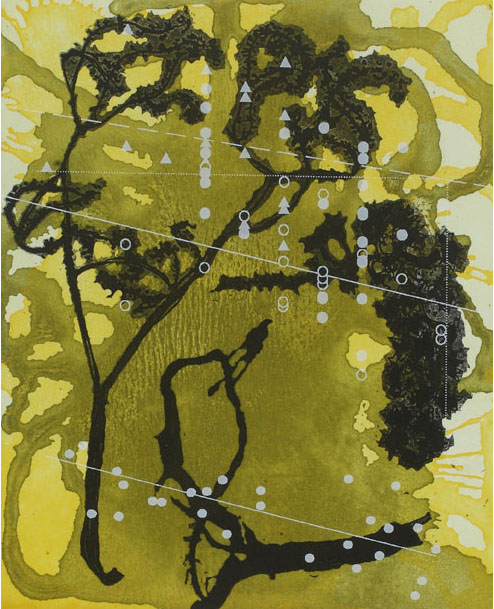 This is a supporting video for Judy Watson's Heron Island Exhibition of works at University of Queensland Art Museum from 9th - 22nd October, 2009.

Marrnyula is the daughter of mother Noŋgirrŋa and Djutjadjutja (c.1935-1999). Her father, Djutjadjutja, was a senior Djapu statesman and winner of the 1997 Best Bark Painting prize in the National Aboriginal and Islander Art awards. Marrnyula began working for the Buku-Larrŋgay Mulka Centre in the 1980s, and is now a pre-eminent senior printmaker and painter. She became assistant to her father with his sacred Djapu paintings as well as developing her own style of naive narrative paintings, all whilst providing material support and moral leadership in her large family and being ‘mother’ to her brother’s three children. In 2007, with her mother, Nongirrnga Mararwili, Marrnyula exhibited works at Annandale Gallery with paintings of the Djapu clan design. In 2009 she was featured in Making it New at the MCA in Sydney. She was a participant in the Djalkiri: We are standing on their names — Blue Mud Bay exhibition project with Judy Watson, Fiona Hall and John Wolseley, which is still touring Australia. In early 2015 her groundbreaking installation 252 Barks at Gertrude Street Contemporary attracted significant notice, as did her contribution to Mother to Daughter at XAP for the Contemporary Art and Feminism project in 2015 (with Nongirrnga and sister Rerrkirrwana.) > Download full bio as pdf

Rerrkirrwaŋa is the youngest daughter of Nongirrŋa and Djutjadjutja. Her father, Djutjadjutja (c.1935-1999), was a senior Djapu statesman and award winning artist. She is part of a close-knit family of art producers that include her elder sister Marrnyula and mother Nongirrŋa. She is married to Gumatj artist Yalpi Yunupiŋu. Rerrkirrwaŋa was taught to paint by her father; in fact many of the paintings attributed to Djutjadjutja in the early nineties were finished by Rerrkirrwaŋa. Rerrkirrwaŋa was one of the earliest print artists to produce work at Buku-Larrŋgay Mulka Centre. In 2009 she won the Best Bark Painting category in the National Aboriginal and Torres Strait Islander Art awards with a fine work depicting her husband’s clan designs of fire. These iconic works are becoming a signature for her. Her marwat (the handmade brush made from fine straight human hair tied to a stick) is finer than any other painting tool. She has consciously striven for the finest rendition ever achieved in this medium. Characteristically, rather than attending the 2009 award ceremony Rerrkirrwaŋa chose to remain at her son’s dhapi or circumcision ceremony. In 2014 she travelled to Santa Fe in the US for her exhibition at the prestigious Chiaroscuro Gallery. > Download full bio as pdf

Judy was born in Mundubbera, Queensland, in 1959, and lives and works in Brisbane. With Marrnyula Munungurr she is a contributor to the renowned exhibition Djalkiri: We are standing on their names – Blue Mud Bay, formed from a cross-cultural exchange between five highly respected Yithuwa Madarrpa artists and four renowned artists from across Australia. Judy has been a participant in many international contemporary Biennials, including those of Sydney and Venice (Fluent, 1997) and recently was a respondent to the British Museum's ambitious exhibition Indigenous Australia — Enduring Civilisation (British Museum, then National Museum of Australia 2015). Judy was a contributor and keynote speaker for Mother to Daughter at Sydney College of the Arts for the Contemporary Art and Feminism project in 2015. > Download CV as pdf

Djalkiri: We are standing on their names, Blue Mud Bay

The concept for this cross-cultural project came about in 2009, during the 150th anniversary of the publication of On the Origin of Species by Charles Darwin with its evolutionary focus on relationships between animal species. The title, Djalkiri: We are standing on their names, Blue Mud Bay are words spoken by Djambawa Marawili. It is an acknowledgement of cultural inheritance based on understanding and mutual respect.  The project sought to juxtapose Western scientific view-points and knowledge with the holistic perspective of Yolngu people. Artists and Participants: Djambawa Marawili AM, Liyawaday Wirrpanda, Marrirra Marawili, Marrnyula Mununggurr, Mulkun  Wirrpanda, Fiona Hall, John  Wolseley, Jörg  Schmeisser, Judy  Watson, Basil  Hall, Glenn Wightman, Howard  Morphy, Peter Eve, Angus Cameron, Rose  Cameron. Exhibition tour dates: 2011 to 2013. Angus Cameron 2010, Nomad Art Productions.   Download a PDF Catalogue of the Folio (2.4MB) >> http://www.nomadart.com.au/?p=4045