Matriarchs: Motherlines of the Yolgnu and Tiwi Islands, brings together generations of artists committed to keeping Yolgnu and Tiwi law and culture strong. The exhibition considers their work from the perspective of a feminist genealogy tracing matriarchal and collegiate relationships.
Elders can be comparatively young in a biological sense, as the focus is on life stages and relative degrees of maturity, rather than on chronological age (Morphy, 2004). Value is placed on cultural knowledge and helping children understand the practical aspects of life, society and culture as well leadership abilities and decision making on behalf of the community.

The exhibiting artists often teach, run art centres or do ranger work: Nongirrnga Marawili for example, is a senior advisor to children at Yirrkala school, Banduk Marika has served on the Boards of the National Gallery and Australia Council and Michelle Woody Minnapinni is the current chair of Jilamara Arts & Crafts Association which includes the fine Muluwurri Museum (established in 1988), a collection held in trust for the Milikapiti community. Historically northeast Arnhem Land and the Tiwi Islands formed part of the Macassan trading routes.

The contemporary Aboriginal art world was forged in a time of radical change in the late 1970s and early 1980s with the merging of previously divisive categories of urban versus traditional, or innovative versus static. During this time, they founded the artist-run art centres and ANKAAA in Darwin (now ANKA and Desart). Another decisive moment other was the homelands movement enabled by the Land Rights Act (Northern Territory) in 1976. Most Yolngu artists work from autonomous homelands. 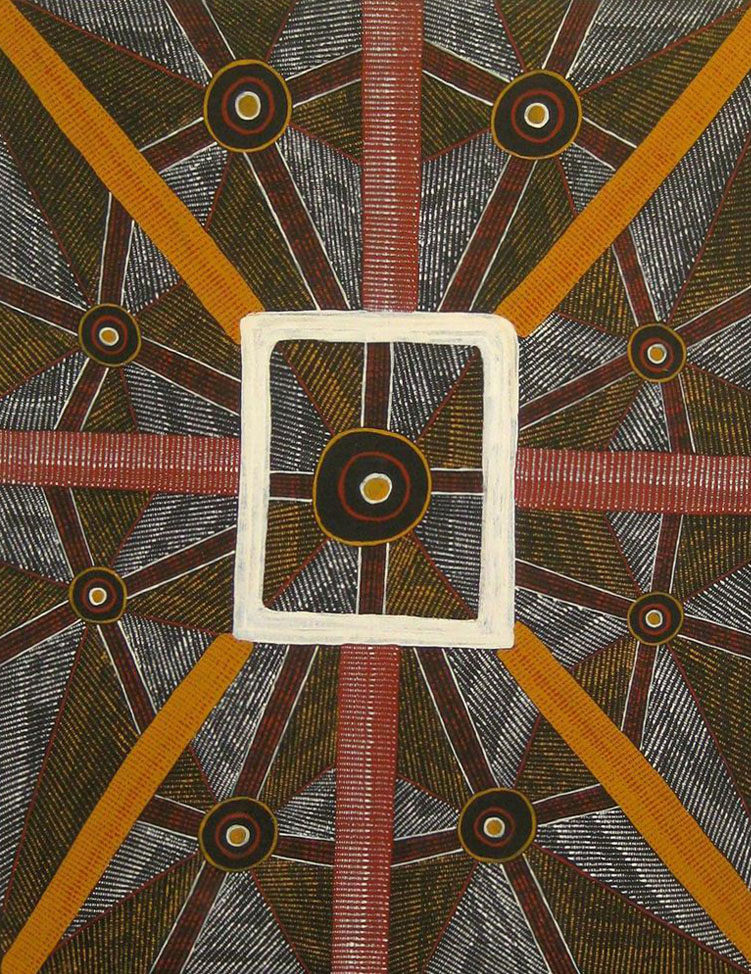 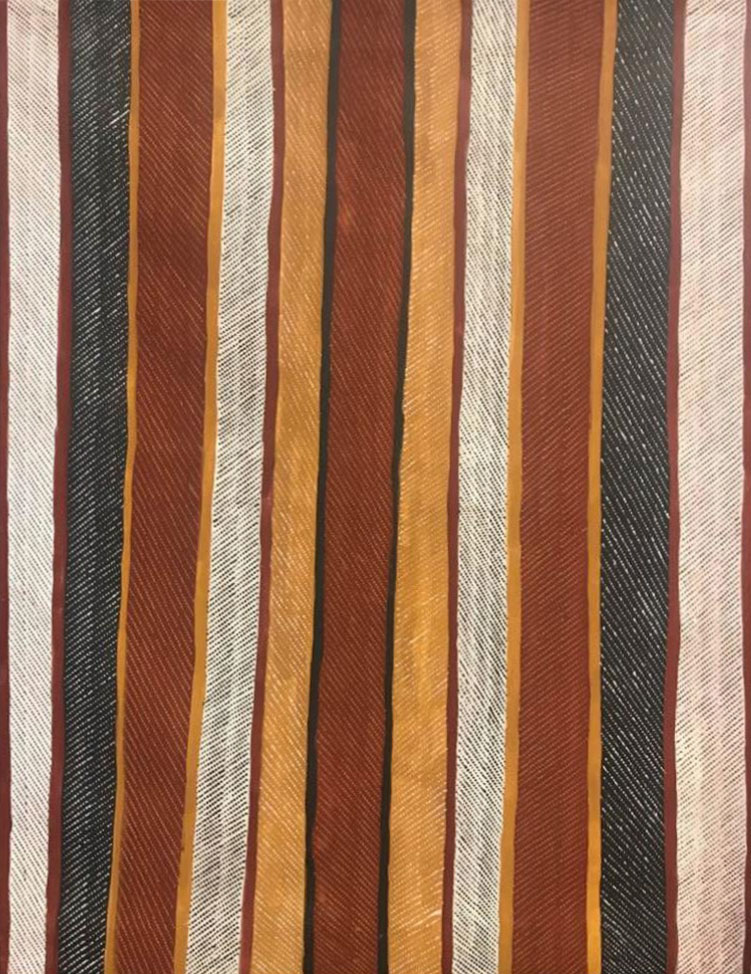 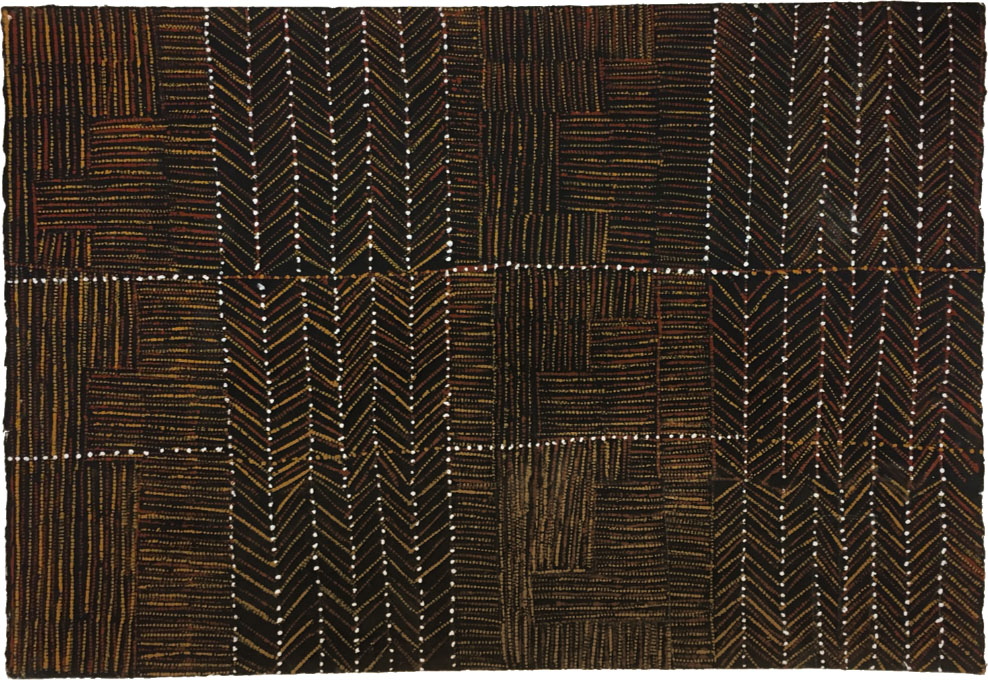 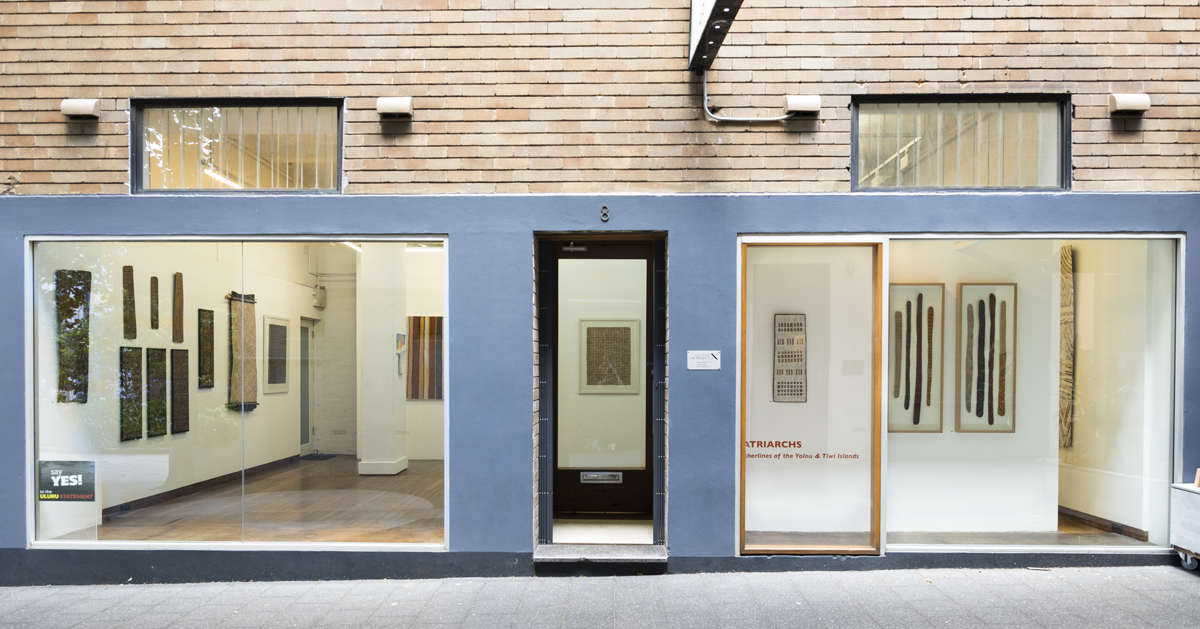 The Cross Art Projects, MATRIARCHS – Motherlines of the Yolgnu and the Tiwi Islands. Photo by Silversalt Photography 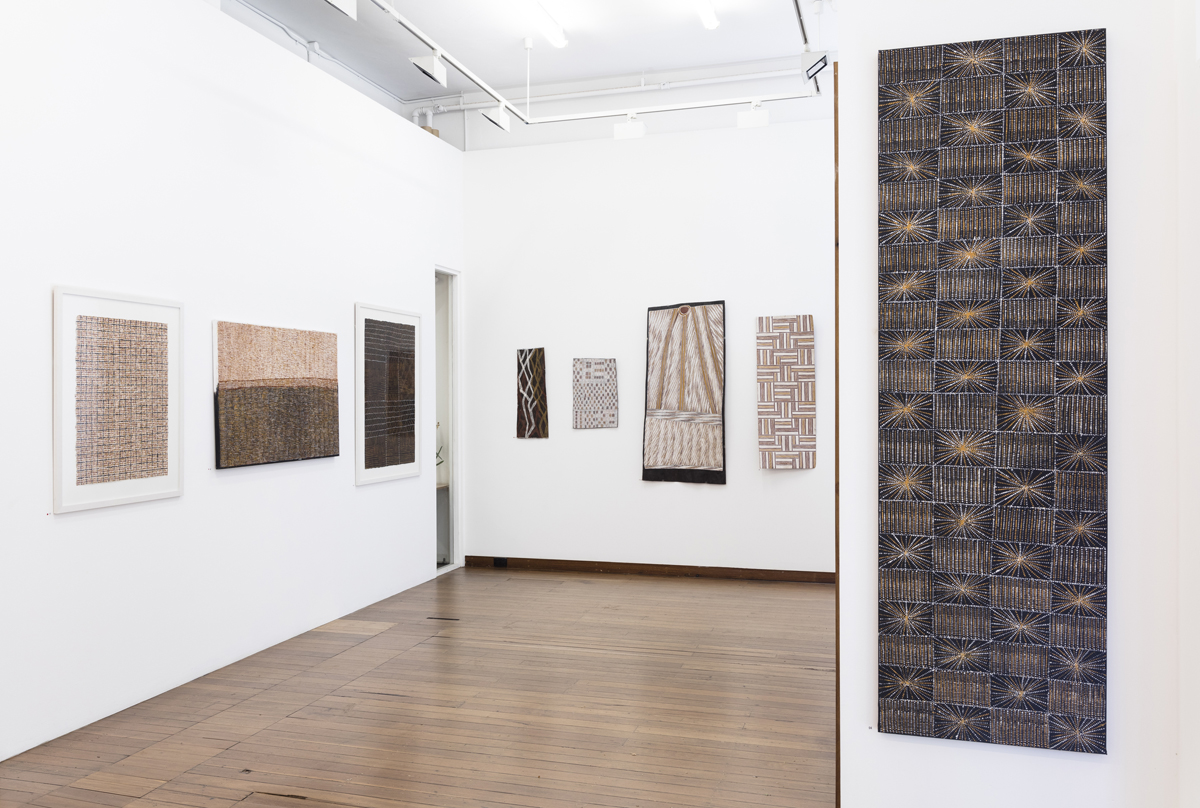 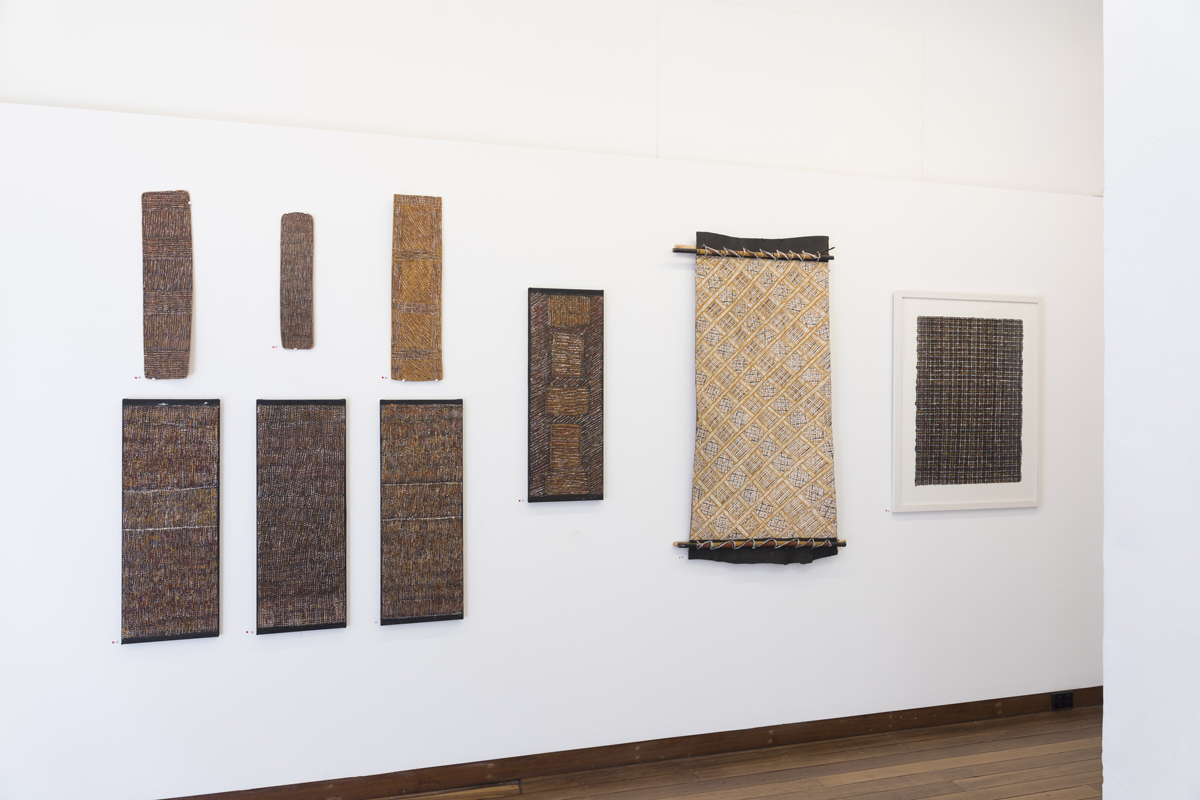 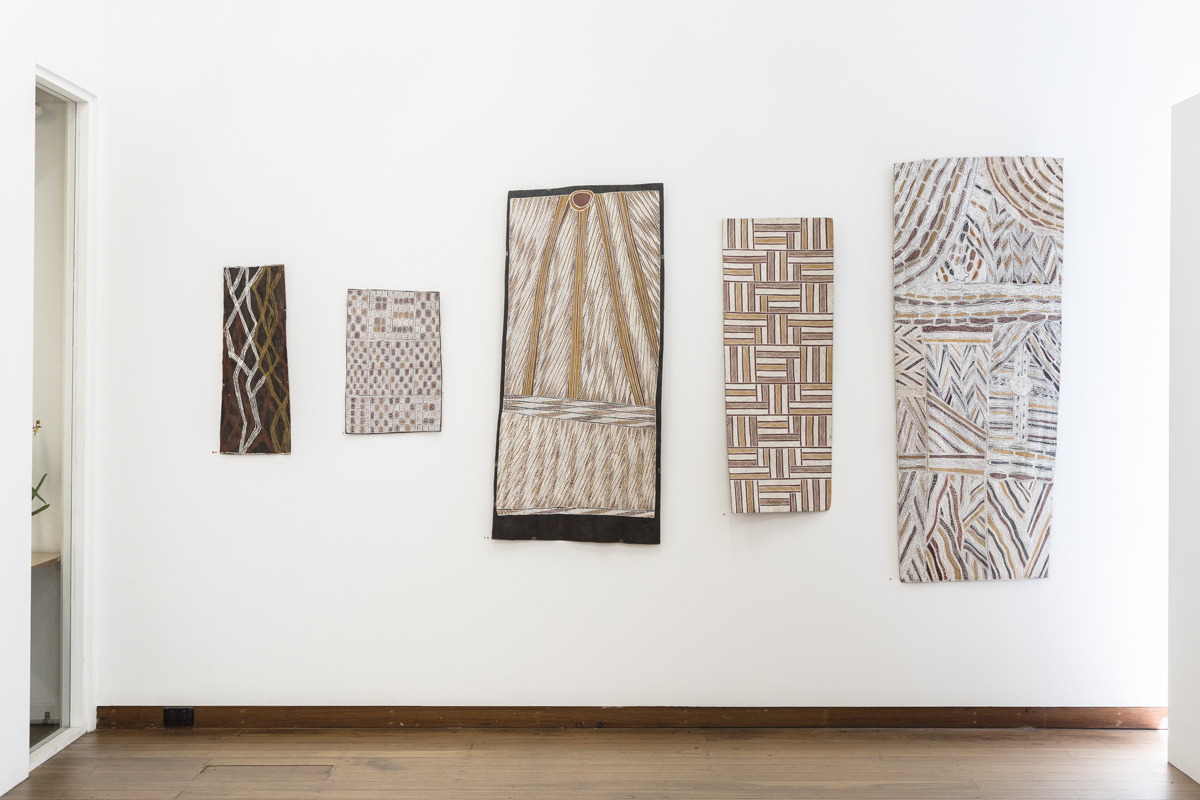 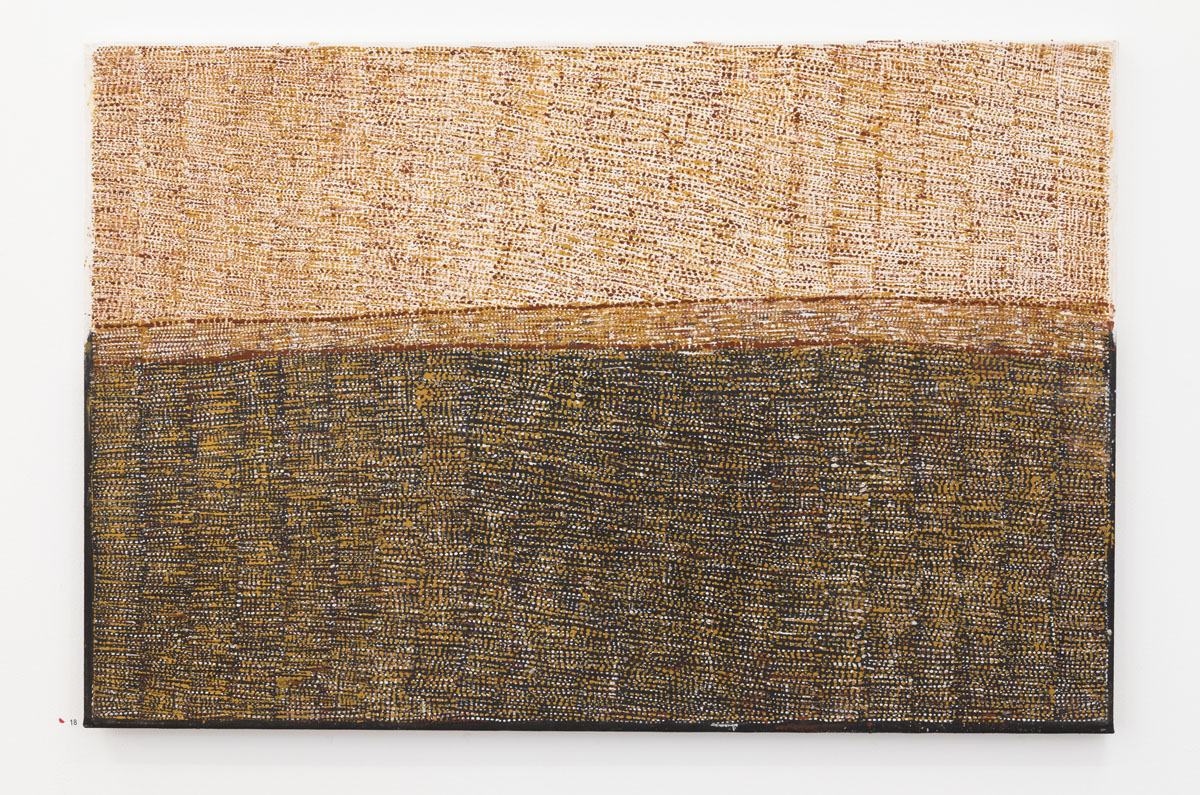 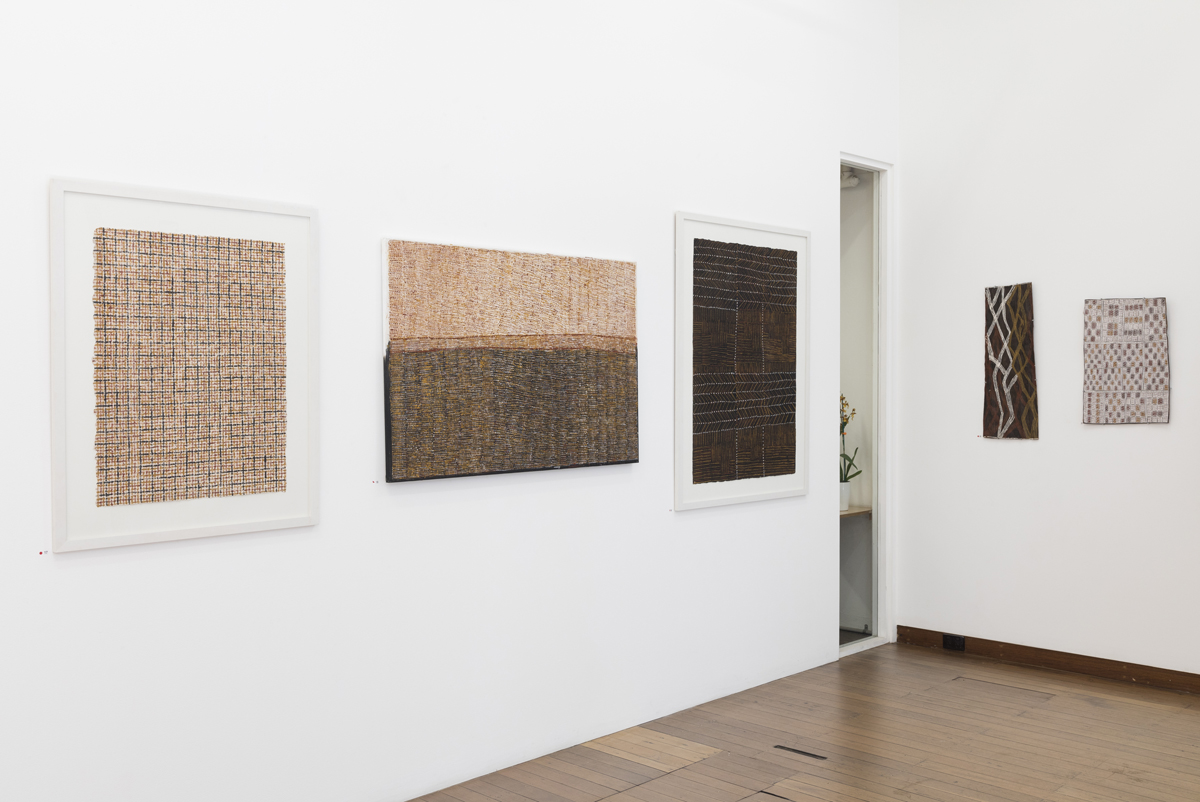 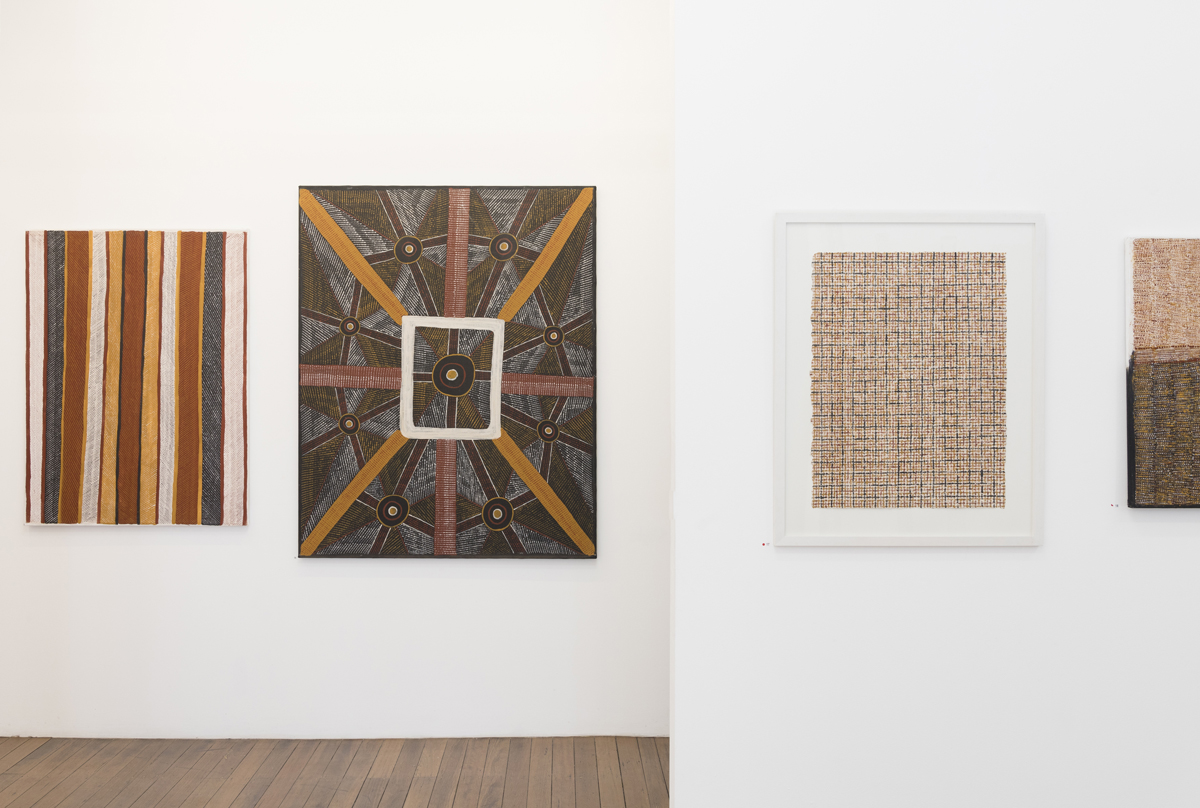 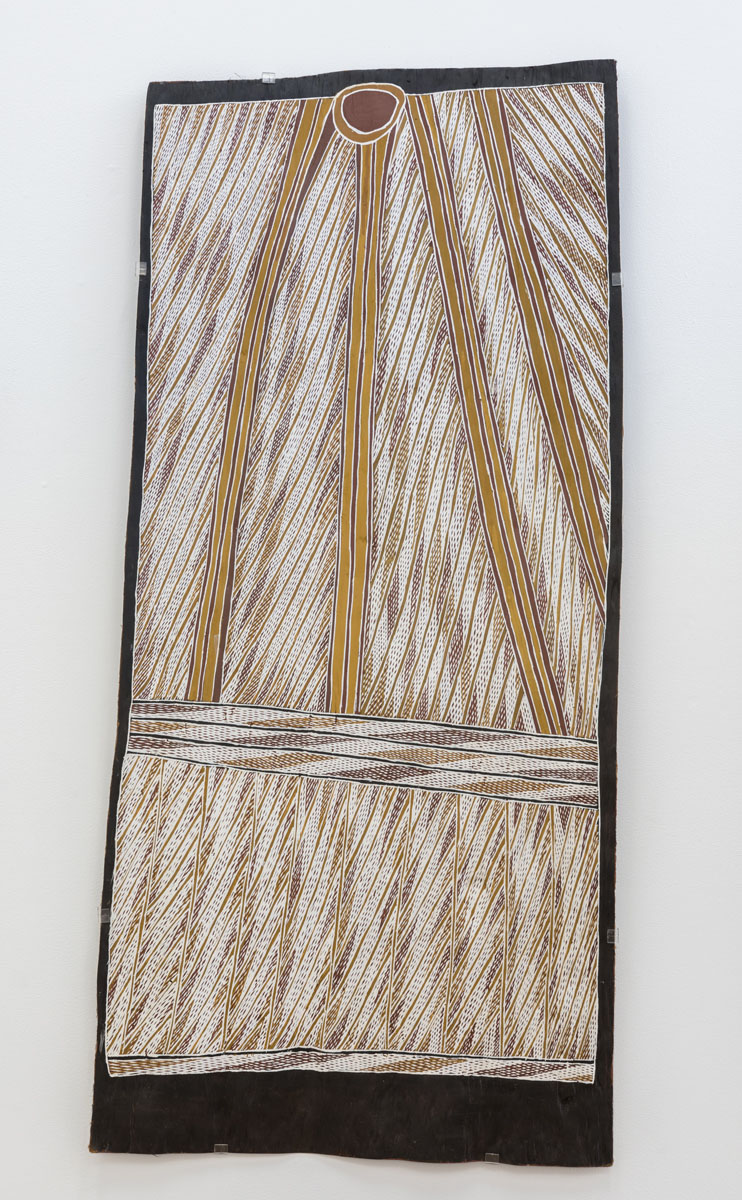 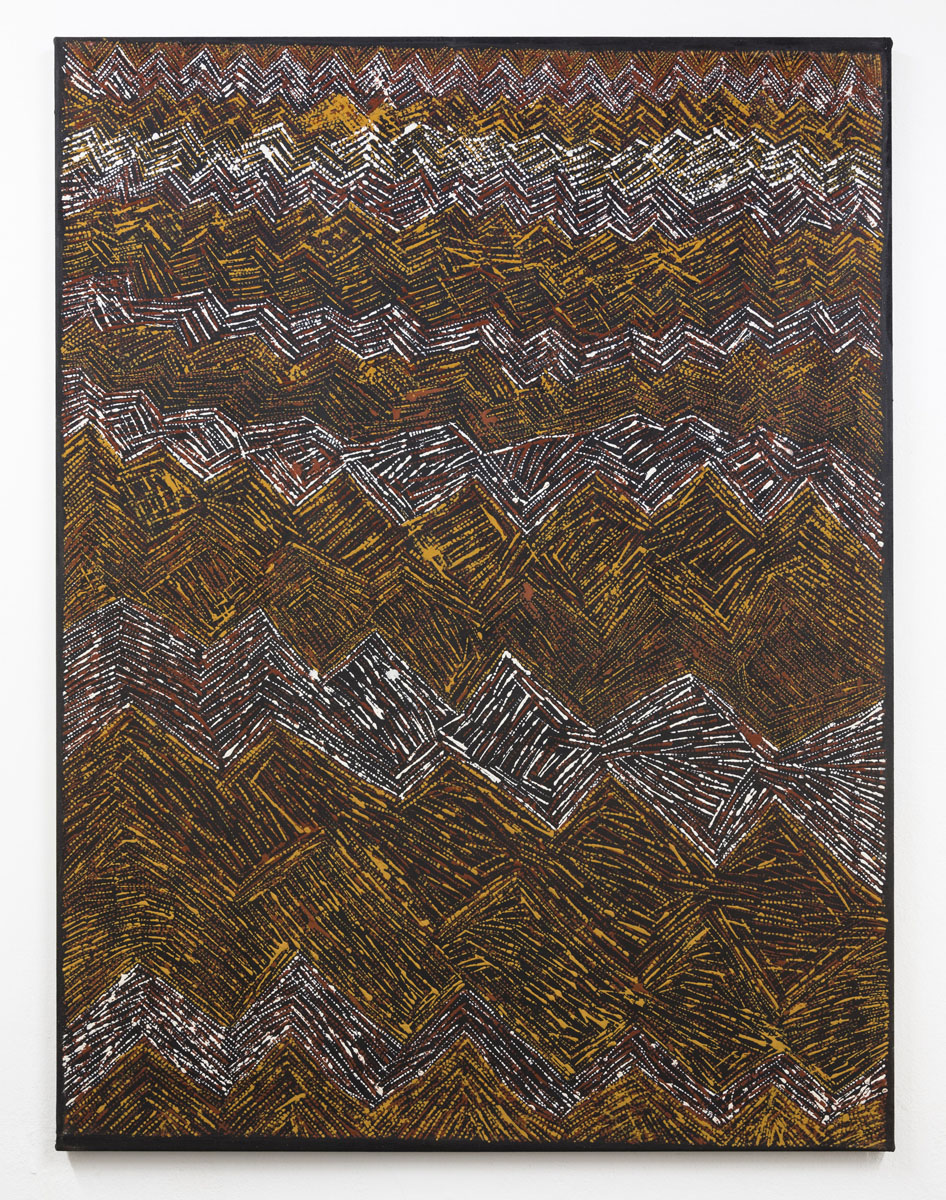 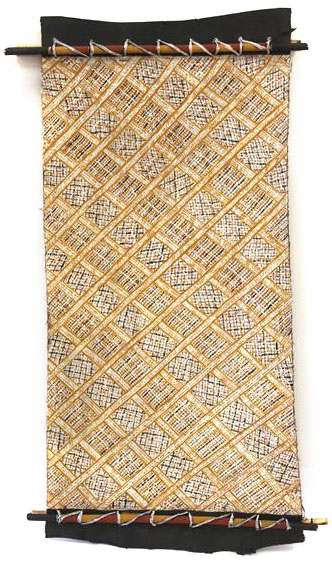 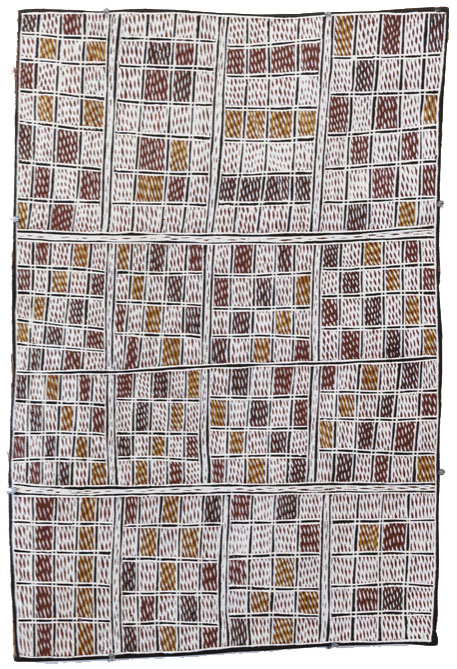 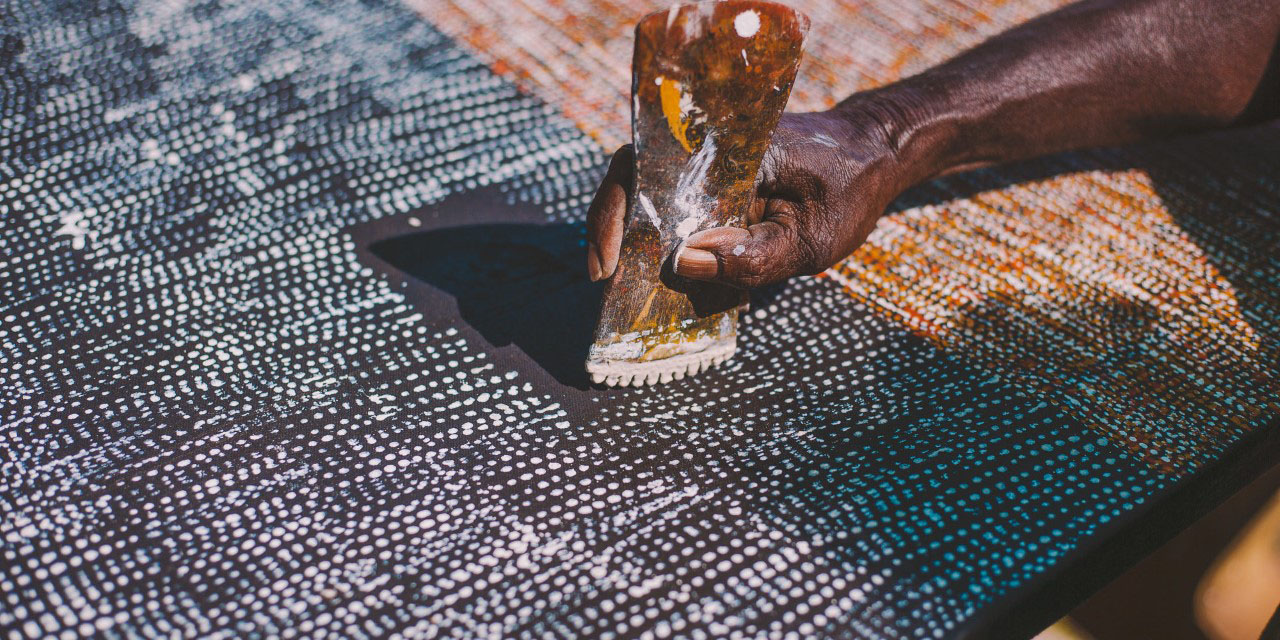 Kayimwagakimi, the traditional carved Tiwi comb in action – still used by a handful of Tiwi artists.

In 1982 Banduk Marika mounted the first of several exhibitions of women’s work from Arnhem Land at Seasons Gallery in North Sydney (which she ran with Jennifer Isaacs). When Banduk and family returned to Yirrkala she became manager of Buku-Larrnggay Art Centre. Banduk Marika is affiliated with Yalanbara and Gulurnya homelands — the land on which the art centre stands.

Another decisive moment (from the late 1970s and 1980s) was when some senior lawmen taught their daughters to paint sacred imagery onto bark at Yirrkala, an innovation that produced some of the most renowned Australian painters of the late-twentieth century;

Amongst the first women to paint sacred clan designs was the late Galuma Maymuru (Mrs Wirrpanda), instructed by her father the great Narritjin. Banduk Marika and her sisters were taught Rirratjingu clan designs by their father Mawalan Marika. They knew that the Indigenous cultural knowledge base and contemporary art was of inestimable value for Australia and the world and needed to survive the impact of the bauxite mine they had fought so hard to stop.

Generational shifts and changes in materials have transformed the ‘classic Yolngu aesthetic’ and enabling brighter cross-hatching and the easy moves from body scale to museum scaled work. Many artists now focus on long-term art and research projects, for example Mulkun Wirrpanda has worked with John Wolsley on Midawarr / Harvest, a National Museum Australia touring exhibition and major catalogue (edited by Will Stubbs and John Wolsley, 2018) and Nongirrnga Marawili’s solo exhibition, From my heart and mind, at the Art Gallery of NSW is concurrent with Matriarchs: Motherlines of the Yolgnu and Tiwi Islands.

The leadership of the Yolngu continues to resist their dispossession by government and Bauxite miners. In addition to the Yirrkala Church Panels and Yirrkala Bark Petition, they have used their art to assert their connection to land in; the Gove Land Rights Case; the Woodward Royal Commission; the Barunga Statement; the Yirrkala Homeland Movement; the Land Rights Act (NT) 1976; the Both Ways education bilingual curriculum; and the contemporary music band Yothu Yindi.

Under Yolngu Law the ‘Land’ extends to include sea. Both land and sea are connected in a single cycle of life for which the Yolngu hold the songs and designs. To demonstrate their rights and responsibilities the landowners combined to make the Saltwater Collection of Yirrkala Bark Paintings of Sea Country in 1997. (National tour 1998-2001; now held at the Australian National Maritime Museum in Sydney). In 2008, the High Court determined that the Yolngu were the owners of sea estates covering Aboriginal land.

Parlini Jilamara means old design. Jilamara is originally drawn from the body painting which accompanied the pukumani (funeral) and kulama (initiation / yam) ceremonies. Yirinkirripwoja or body-painting (often shortened to Pwoja) is applied to performers in these major ceremonies. Most vividly, Jilamara is also used to decorate the tutini or pukumani poles placed on the gravesites, the haunting ochre designs left to weather following the mourning rituals.

Over three decades artists have worked under the auspices of Jilamara Arts and Crafts a contemporary art centre on Melville Island, established by the esteemed Kitty Kantilla and Freda Warlapinni. The next generation notably, Raelene Kerinauia, Timothy Cook, Patrick Freddy Puruntatameri and Janice Murray are also firmly established internationally and are now joined by Kaye Brown and Michelle Woody Minnapinni. Each artist’s strong mark-making brings to life Tiwi memory collective memory and aesthetics. The ochres are from coastal cliffs on Melville Island.

Kaye Brown and Raelene Kerinauia paint with the Kayimwagakimi, the traditional carved Tiwi comb still used by a handful of Tiwi artists. Made from bloodwood or ironwood, it is about 15cm high with a single row of teeth. The comb is dabbed in ochre and applied to the painting surface resulting in a straight line of fine dots. Kayimwagakimi and marlipinyini (a fine stick or pandanus frond chewed to form a brush) have largely been replaced by modern brushes.

Similarly, Kaye Brown’s works speak to old Tiwi paintings shown by the strong intersecting line design, over layered ochres to create glowing depths that absorb and change with the light. She moves from Jilamara paintings to depicting the mixing of fresh and salt water in the intertidal areas of the islands and, as in the painting ‘Winga Amintiya Yuwunka’, is equally capable of creating a luminous sea scape.  Michelle Woody Minnapinni often paints with a brush, but the work ‘Winga Wama’ also uses pwoja technique and motifs in striking gestural contemporary as if the saltwaters themselves mix the traditional and modern.

Thanks to the artists’ representative galleries for their support. Special thanks to Will Stubbs at Buku-Larrnggay Mulka Centre and Jackie Hosking at Jilamara Arts and Crafts. Thanks to centre art workers for artist biographies and artwork stories.