The exhibition Karrang Kunred/Mother- Land along with its sister show Báb-barra: Women Printing Culture,(1) celebrated the strength of traditional culture and the contemporary dynamism of women’s art in Maningrida in north-central Arnhem Land. The artist-initiated alliance brought together two institutions, renowned Maningrida Arts and Culture and Babbarra Womens’ Centre, to show the feminist, cultural and economic framework for art practice in Maningrida.

The sisters Jennifer Wurrkidj and Deborah Wurrkidj and their aunt Susan Marawarr are senior Kuninjku women of the Kurulk clan. Karrang Kunred in Kuninjku means ‘mother’s homeland’ or ‘the country of my mother’. The artists chose the title as they share one mother country, the stone country near Mumeka and Barrihdjowkkeng homelands. In general speech the artists refer to this country as their ‘mother’, which reveals the deep cultural connection to place. Speaking to the significance of Karrang Kunred, Deborah Wurrkidj explains, ‘We are thinking about our land. Our thoughts always return to our homeland. The old people, they taught us all this a long time ago. My father’s sisters, my mother’s mother and my aunties, they taught us, and now we know.’

The women selected traditional bark painting, lorrkon (hollow logs) and mimih carving to place beside experimental textile prints. The key motifs of Kunmadj (dilly bag) and Mandjabu (fish trap) celebrated their utilitarian as well as cultural (and symbolic) significance. Their concept was to merge ceremony and culture with intimate connections to the surrounding bushlands, bush foods, sacred sites, ancestor spirits and everyday objects. The delicately gridded and finely dotted rarrk designs on both bark paintings and textiles interpret a metaphysical experience with country—communicated through ceremonial body-paint designs—which in essence work to successfully bring together the experience of ‘outside’ and ‘inside’ phenomena.

To show the country and its palette—rocky sandstone escarpments scattered with rock art, dense paper bark forest, freshwater rivers and seasonal floodplains—the installation featured only barks painted with natural pigments collected on Country, baskets crafted and coloured from natural fibres from Country and textiles printed in colours chosen to mirror these hues. The eternally popular mimih who live in the stone country made an appearance: their tall, sculptural bodies introduce the humour that surrounds beliefs in naughty and at times salacious beings, who are so thin that a gentle wind can break their necks.

Ingrid Johansen, co-curator and manager of Babbarra, writes: ‘Amongst the Kuninjku people certain sites are associated with djang. Djang relates to the ancestral beings and powers of country. Djang sites and stories belonging to Karrang Kunred country are depicted throughout the exhibition, including the yawkyawk female water spirit living in certain Arnhem Land freshwater rivers with long hair (which can be mistaken for seaweed), bare breasts and a fish-like tail.

For the Kuninjku, yawkyawk is also the word used for “young woman”. Wak wak is another sacred djang story that relates to the black crow ancestor called djimarr. Susan Marawarr and Deborah Wurrkidj’s textile works, titled Wak Wak, are variously a two and four-layer screen design with intricate rarrk layers coming together to create the feeling of movement and depth. On bark the rarrk technique is created by painting consistent cross-hatched strokes over many layers. The artists paint rarrk using native reed stems that have been whittled down to create thin brush-like utensils.’

Jennifer Wurrkidj explains the cultural significance: ‘us bininj (Aboriginal) mob, we are same like our country. That country is like us, and we are like that country, like family. We are just one, same like them animals, snakes, birds—any type really. And when we pass, it just goes back in like one circle, you know. Like that, that’s the story.’

The three women live on homelands and in Maningrida. James Iyuna—the celebrated uncle of the Wurrkidj sisters—taught his two nieces how to paint. Susan Marawarr’s startling
black and white palette pushes new ways of painting, perhaps to differentiate her hand from that of her brothers John Marwurndjul and James Iyuna. John Mawurndjul AM is a National Aboriginal and Torres Strait Islander Art Award winner, lauded by a travelling retrospective exhibition, I am the Old and the New, which opened at the Museum of Contemporary Art concurrently with Karrang Kunred, just over a decade after his retrospective exhibition at the Museum Tinguely, Basel, in 2005.

In contrast, survey exhibitions of work by women artists have been sporadic. Their work has been the focus of key group exhibitions: Susan Marawarr for example, in the acclaimed Crossing Country (2004)(2) and Fine Lines: works of ornamentation and decoration by Maningrida Artists (1999), an exhibition of works made by women throughout the 1980s.(3)
This is changing. The women of Maningrida are a large part of a lively contemporary art scene and are strong voices advocating for change—cultural, economic and environmental.

The group exhibition, Báb-barra: Women’s Printing Culture (2017) featured Susan Marawarr, who since 2001 has worked at Babbarra as a senior artist mentor. She collaborated with Waanyi artist Judy Watson on the touring exhibition Bush Colour, and toured the USA promoting female printmakers and supervising bark-painting workshops. Through the Babbarra Women’s Governance Group, the artists are lobbying for better health services in Maningrida, for environmental protection against fracking, and supporting people’s return to life on homelands.

Bábbarra artists are saltwater and freshwater people living in a region encompassing 7000 square kilometres. Bábbarra is a word in the Ndjébbana language of the Kunibídji people on whose Country the community of Maningrida lies. It is the name of a place belonging to the Dukúrrdji clan. Bábbarra Women’s Centre has a proud history of positive social impact and works to change the narrative about the economic vulnerability of Indigenous women. Bábbarra Designs—the major activity at the Women’s Centre—has been in operation since 1989. The centre provides employment and training opportunities by operating sustainable business enterprises. The centre also runs an op-shop and other activities, and has refurbished five homeland women’s centres.

Bábbarra Designs is one of a small group of Indigenous textile-producing art centres in Australia that design, print and sew product onsite in community. The innovative variation
in design reflects artists working in over 12 language groups and from many different clans. This immense cultural and linguistic diversity is shown in each silk-screened or lino-printed textile that tells the life of the land and its bush crafts as well as ancestral stories, or djang/wangarr.

Since 1991, Deborah Wurrkidj has worked alongside her mother Helen Lanyinwanga, and sister Jennifer Wurrkidj (since 2007) at the women’s centre. Their intricate designs
are illustrative of the artistic innovation in Maningrida since the 1990s. Deborah Wurrkidj is a graduate of the Arnhem, Northern and Kimberley Artists (ANKA) Arts Worker Extension Program. She states, ‘I want to be a leader and help others understand more about the business side of making art.

I have enjoyed looking at different galleries.’ Jennifer Wurrkidj is also a graduate of the important ANKA Arts Worker Training Program. Anthropologist Jon Altman explains, ‘The strategic use of art as a source of political and economic power has provided Kurulk with a means to define their difference, mark social and geographic boundaries, substantiate claims to country and find an economic means to live on country. This has seen the emergence of new artistic social relations very evident in place-based and stylistically distinct schools of art, where people live together, work together and teach each other.(4)
____ 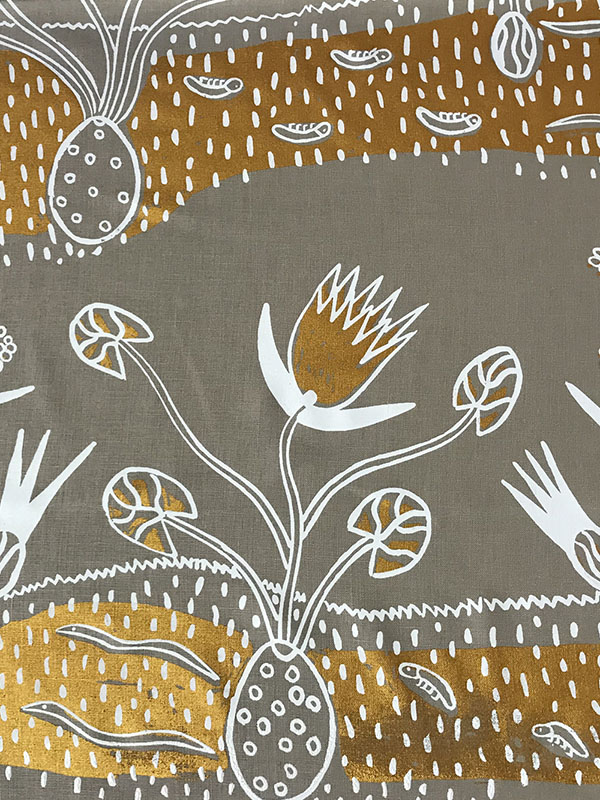 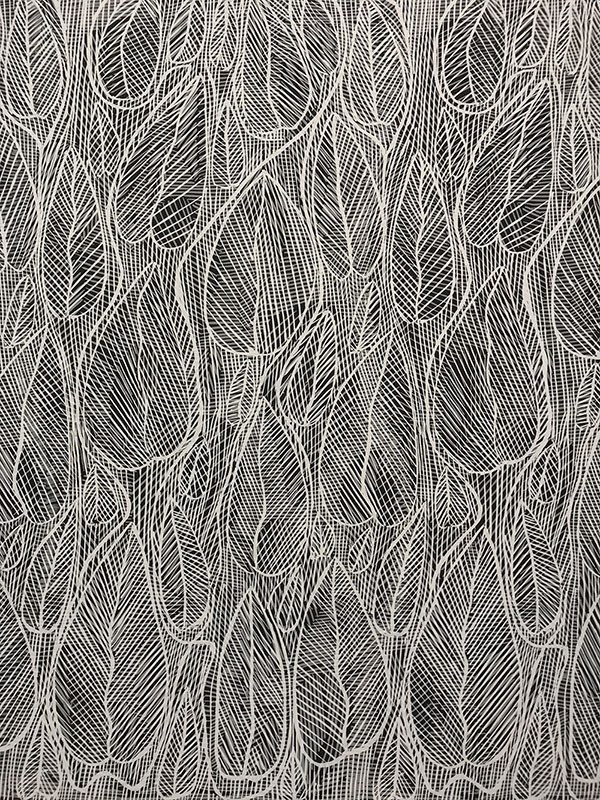 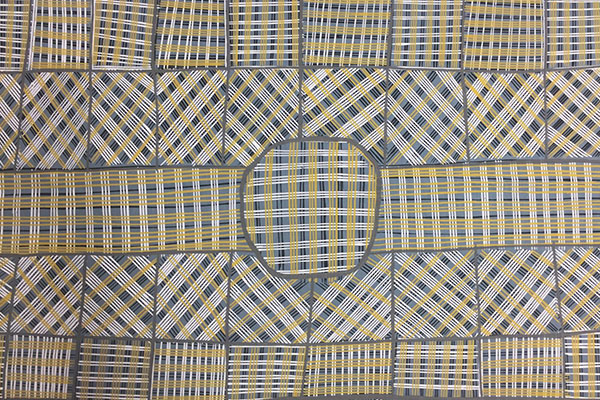 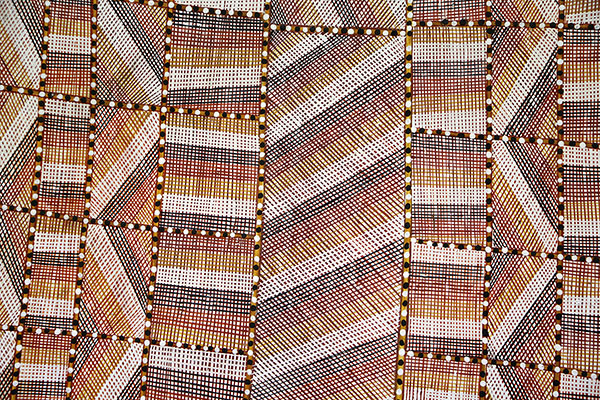 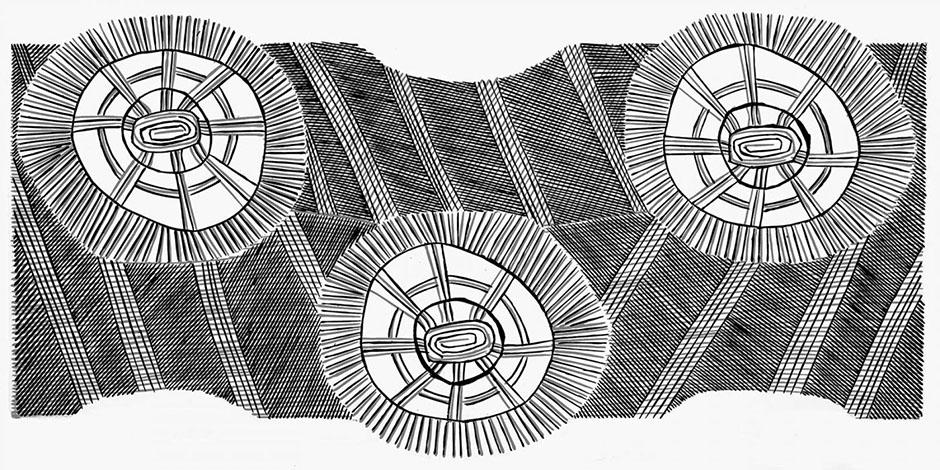 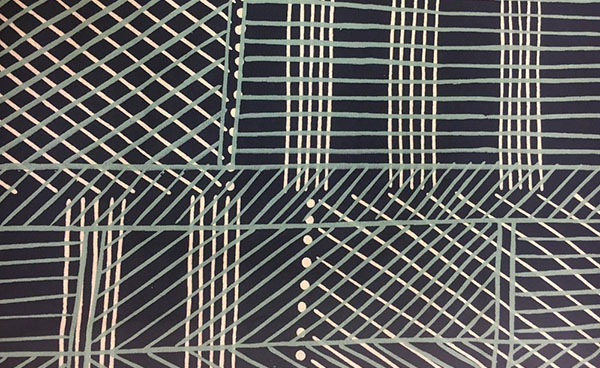 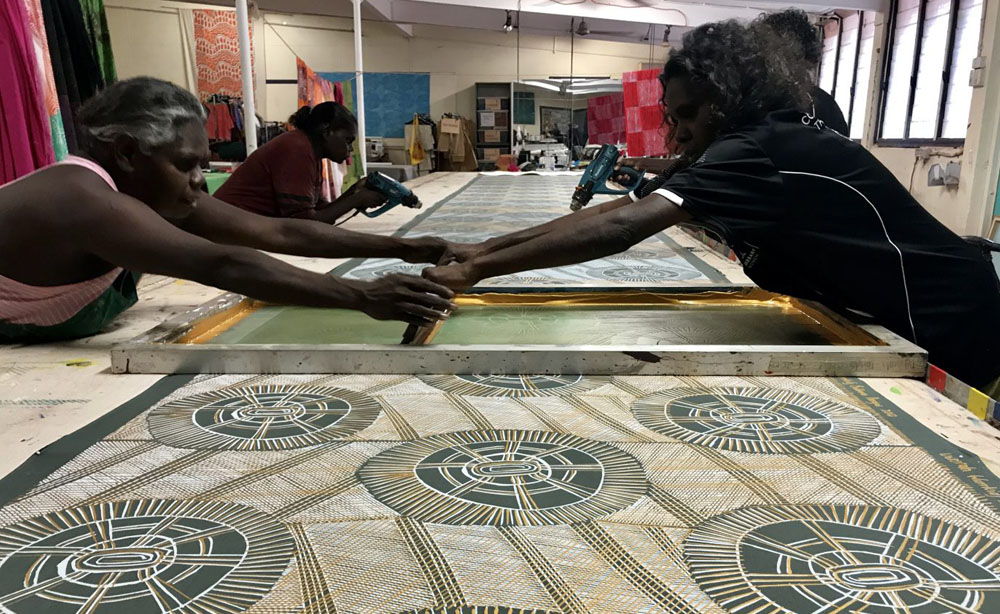 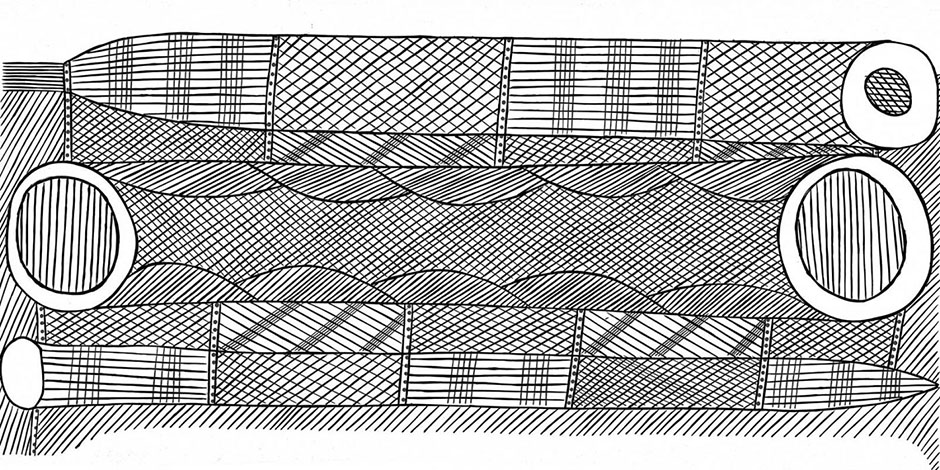 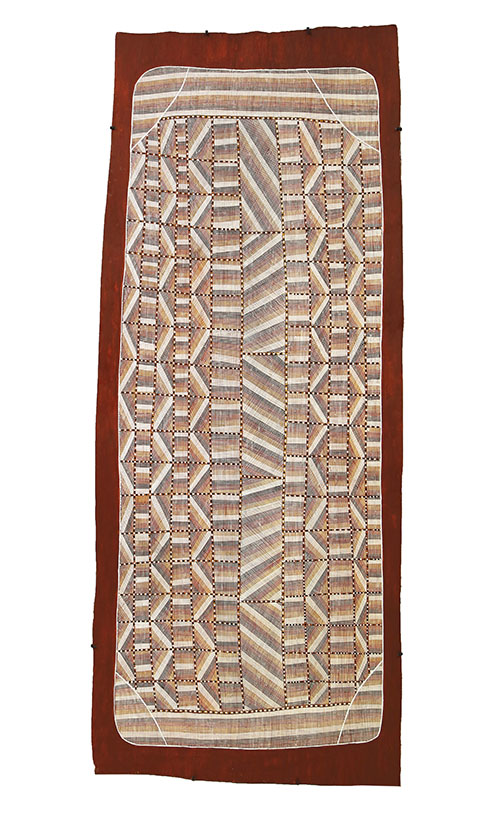 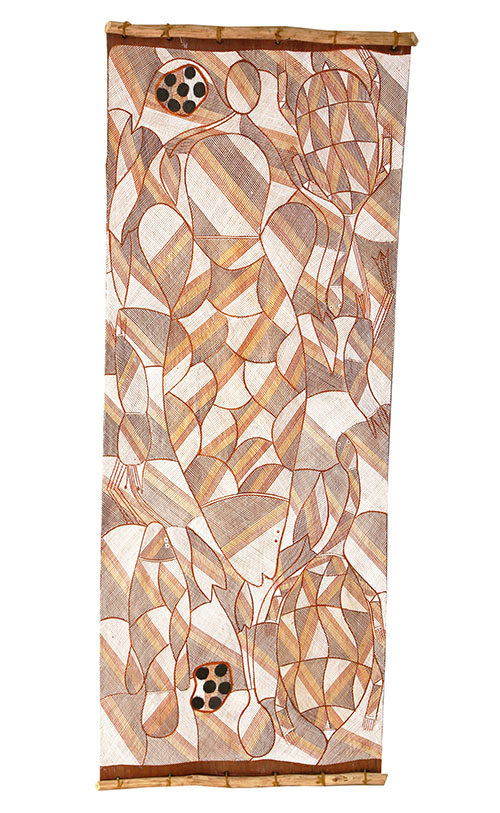 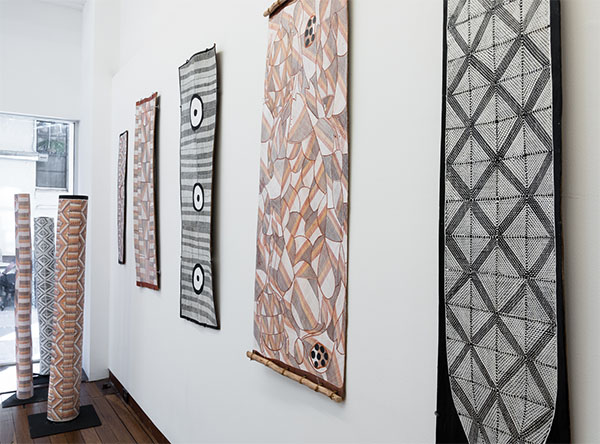 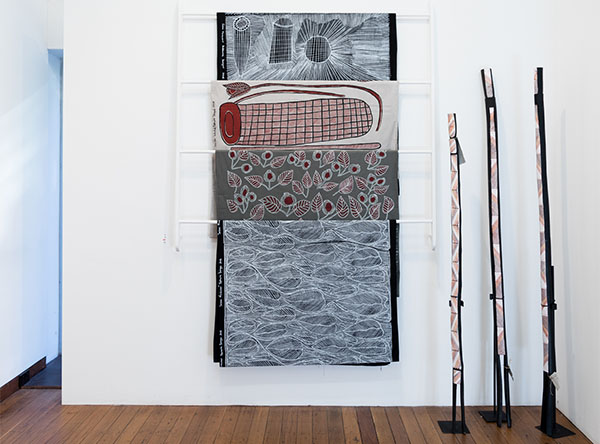 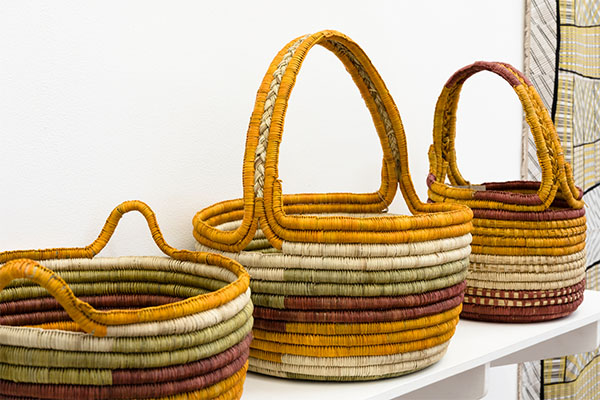 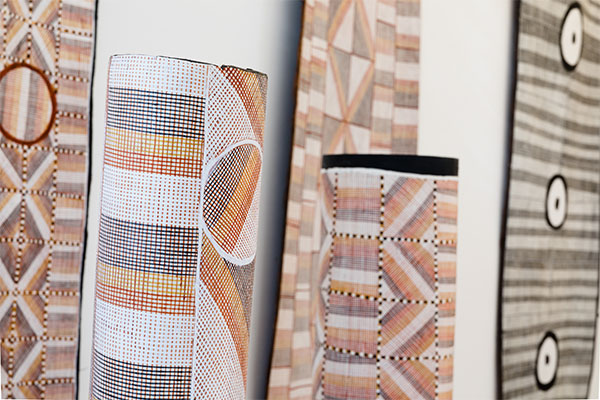 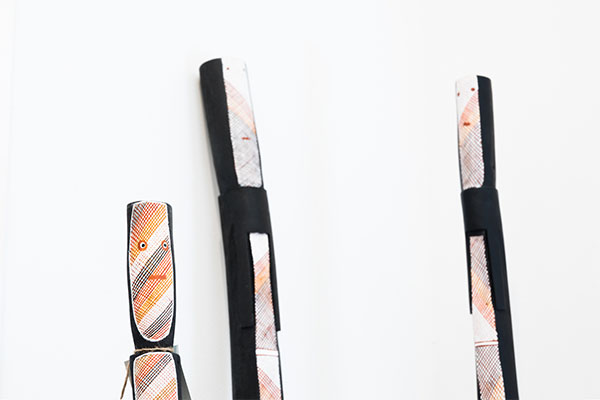 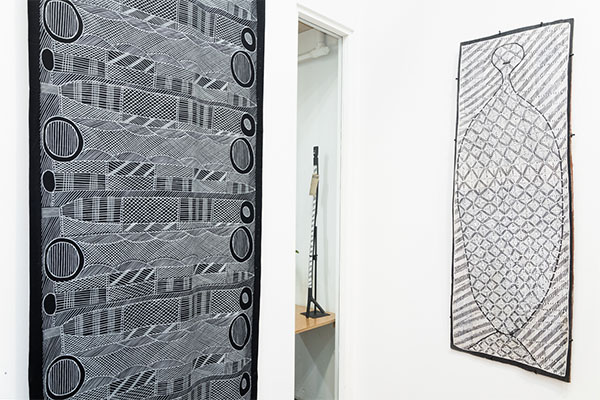 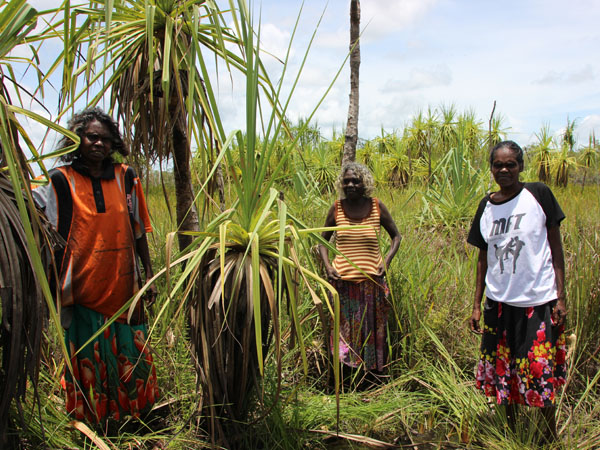 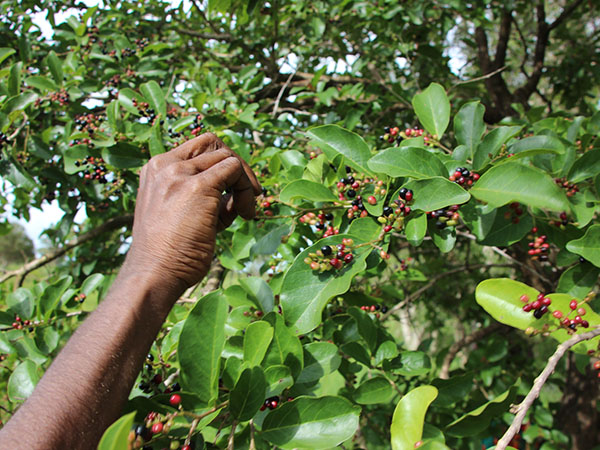 A glorious exhibition opening and fantastic night in at The Cross Art Projects in Kings Cross with the dynamic dancing trio aritsts Janet Marawarr, Susan Wurrkitj and Jennier Wurrkitj.

Kuninjku artist, Susan Marawarr, was born in 1967 at Maningrida in north-central Arnhem Land. She is the daughter of artists, Anchor Kulunba and Mary Marabamba and the sister of eminent bark painters James Iyuna and John Mawurndjul. Marawarr is a skilled printmaker, sculptor, weaver and bark painter, known for her striking black and white palette. Her works have a graphic and optical effect, where her intricate patterns often intertwine and overlap. Common subjects include the djang (the Dreaming) of Wak Wak, Ngalyod (Rainbow Serpent) and yawkyawk (female water spirit), alongside the imagery of dilly bags, fish-traps, mats and baskets, which may also have symbolic dimension.

She collaborated with Waanyi artist Judy Watson for Watson’s public art commission of bronze fish fences and dillybags installed at Sydney International Airport, and toured the USA with Bush Colour, promoting the work of female printmakers and supervising bark painting workshops. For over a decade, Marawarr’s artworks has been presented by Maningrida Arts and Culture and within their collective shows. She has also featured in exhibitions at the Art Gallery of New South Wales [Crossing Country, 2004 and work is held in the collections of Art Gallery of Western Australia, Museum of Contemporary Art, Museum of Victoria and National Gallery of Australia. Susan has since 2001 worked with Babbarra and she featured as one of the senior artists, mentoring the junior artists, in a group exhibition, Báb-barra: Women’s Printing Culture at The Cross Art Projects (2017).

Kuninjku artist, Deborah Wurrkidj, was born in 1971 at Maningrida in north-central Arnhem Land. As an artist, she relishes new art forms while maintaining her strong clan traditions and her deep connection to country and cultural knowledge and natural environment. Since 1991, Deborah has worked alongside her mother, Helen Lanyinwanga, and sister Jennifer Wurrkidj at Bábbarra Women’s Centre. Deborah’s intricate designs are illustrative of the artistic innovation in Maningrida since the 1990s: in painting, printmaking, carvings and weaving. Deborah Wurrkidj made beautiful work for Replant: A New Generation of Botanical Art (2006), a print project with artists and scientists working Daly River NT initiated by Nomad Art with Basil Hall Editions. She is a graduate of the ANKA Arts Worker Extension Program (2014), where she learnt more of the administrative and business side of the art world. She stated, “I want to be a leader and help others understand more about the business side of making art. I have enjoyed looking at different galleries.” She has exhibited widely since 2001, throughout Australia as well as in Europe and the United States.

Jennifer Wurrkidj is a highly regarded textile artist who has been working at Bábbarra Designs since 2007 with her mother, Helen Lanyinwanga, and sister Deborah Wurrkidj. Her print designs often feature bush foods and food-collecting and reference the activities of ancestor beings and the ceremonial sites of her homeland, Mumeka. She is a daughter of highly acclaimed bark painter, John Mawurndjul, and is renowned, in her own right for her bark paintings, hollow logs and carved sculptures. She was married to the late Hamish Karrkarrhba, another fine artist and the pair collaborated on many works. Jennifer’s artwork has been exhibited throughout Australia and her textile art is in the collection of the Art Gallery of South Australia. She is a graduate of the ANKA Arts Worker Training Program.

The artists are represented by: Maningrida Arts and Culture (painting and weaving) and Bábbarra Women’s Centre (hand-printed textiles) at Maningrida in Central Arnhem Land.

Dianne Moon (curator), Fine Lines: works of ornamentation and decoration by Maningrida Artists. A comprehensive exhibition bringing together works made by women from Maningrida in the 1980s, 1999. Museum of Contemporary Art Australia (MCA).

Judith Ryan, ‘At the forefront: Aboriginal art from Maningrida and beyond’ in A. Ducreux, F. Salmon and A. Kohen (eds), In the Heart of Arnhem Land: Myth  and  the  making  of  contemporary  Aboriginal  art, 2001 pp.11–26. Musée  del’Hôtel-Dieu, Paris.

To the artists and Kate O'Hara and Ingrid Johanson for selecting the concept and works. Jo Holder thanks Claire Summers, CEO Darwin Aboriginal Art Fair for her encouragement of the project and Fiona MacDonald, The Cross Art Projects.

The artists are represented by Maningrida Arts & Culture (bark and fibre) and Babbarra Women’s Centre (textiles).