England Banggala, a fully initiated elder, recorded the history and religion of his ancestors on bark and paper. Banggala was born at isolated Cadell River in south-central Arnhem Land, home of his An-nguliny clan and Gun-nartpa language speakers. The waterways and flood plains of this fertile and picturesque river region provide his themes and subjects. He passed away in late 2001, aged about 76.

England Banggala came to prominence as one of a group of artists who, from the mid-1970s, transformed an ancient rock and ceremonial painting tradition into a full-time profession. Names such as England Banggala, Johnny Bulunbulun, Peter Bandjuldjul, Mick Kubarkku, John Mawurndjul, Jimmy Njiminjuma, Terry Ngamandara, all associated with the newly established Maningrida Arts Centre, were particularly highly regarded.

Banggala’s painting is typified by a strong line, bold design and purposeful symmetry achieved by use of a broad rather than fine brush. The rarrk (cross-hatching) is restricted to clearly defined areas of the torso, in the manner of ritual body painting, rather than in the background. His works can be contemplative or energetically full of the rhythmic movement of fresh water beings.

Large areas of colour, dotted subdivisions and plain background reflect Banggala’s association with the Rembarrnga language people of the isolated and inaccessible south-western and south-central Arnhem Land. Rembarrnga Aboriginal art, although stylistically individual, is united through common themes of water and stone country and spirit figures.

Bark was Banggala’s preferred medium but he also made carvings and ventured successfully into printmaking. Later he preferred cotton paper and spent long times ‘sitting down’ at Gunbalanya (Oenpelli) painting for Injalak Arts and Crafts which opened in 1989.

The art of England Banggala is hanging in major art galleries and museums and his bibliography is large. He exhibited in most Australian states and traveled with dance groups as a performer singing and dancing in the traditional tribal way. 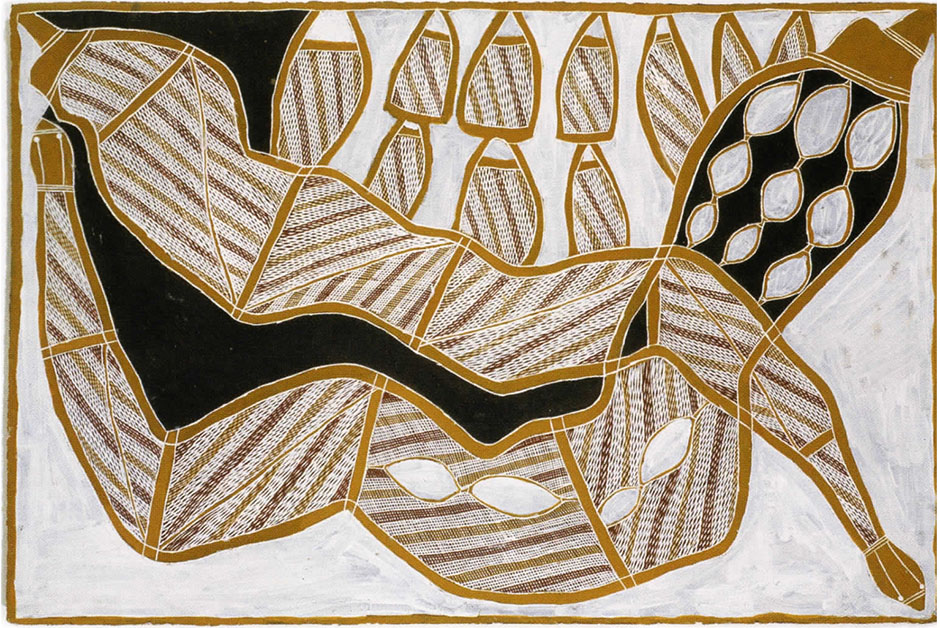 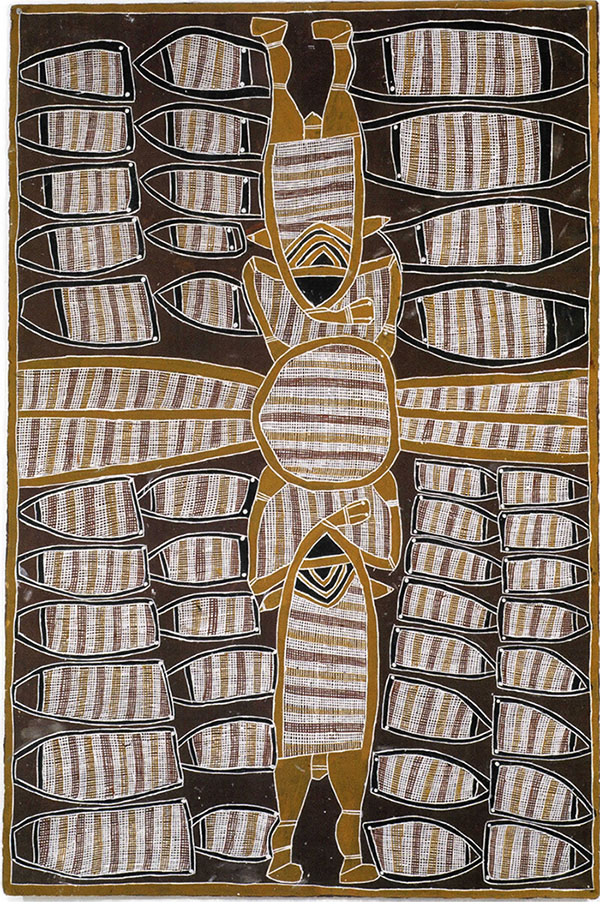 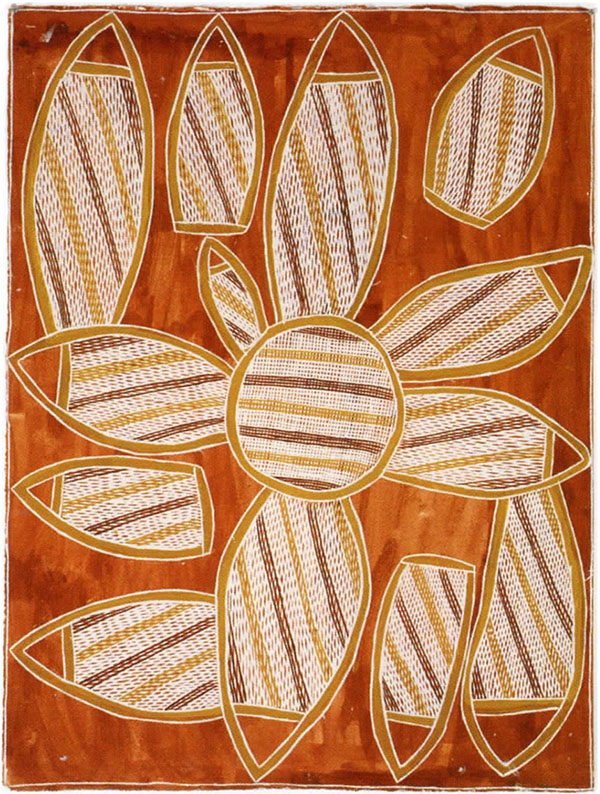 England Banggala saw the benefits of returning to homelands. In the early 1960s, as the senior ceremonial man, he took advantage of a colonial fiat and developed a market garden to supply the new Aboriginal service settlement of Maningrida. Gochan Jiny-jirra on the Cadell River became the first outstation, before the homelands movement gained the political momentum needed to establish the Land Rights Act.

Before settling at Gochin Jiny-Jirra, like many of his contemporaries Banggala moved around.  He intermittently attended Milingimbi Methodist Mission School where a missionary gave him the name England. He worked as a farmer and carpenter at his lonely outstation, sometimes shot buffalo at Oenpelli and lived and worked in Darwin for long periods. Eventually Banggala married Mary Karlbirra, his promised wife, and they raised seven children.

Significantly, he taught his daughter, the renowned artist Dorothy Galaledba, how to paint his stories and in 2000 she won the male-dominated bark painting section of the prestigious Telstra National Aboriginal & Torres Strait Islander Awards.

England Banggala’s art and leadership is testimony to the artist’s assurance about the power of the creator beings and their continuing relevance in understanding life in this area of Arnhem Land.

His family withdrew the works in this exhibition from public view as a mark of respect over the mourning period.

This text is part edited from: Anthony Murphy, Obituary for Elder from Cadell River, Association of Northern Kimberley and Arnhem Aboriginal Artists, 2002

Anthony Murphy, manager of Injalak Arts and Crafts, came to know England Banggala well during the last four years of his life when he sat down to paint at Gunbalanya (Oenpelli). Banggala stayed regularly with Murphy, generously teaching his stories.

Injalak Arts And Crafts is located at Gunbalanya (Oenpelli), population 1100, near Kakadu National Park border. The language spoken is Kunwinjku with English as a second language. Injalak opened in 1989 and has over 200 artist and weaver members from Gunbalanya and ten active outstations. View more works: www.injalak.com