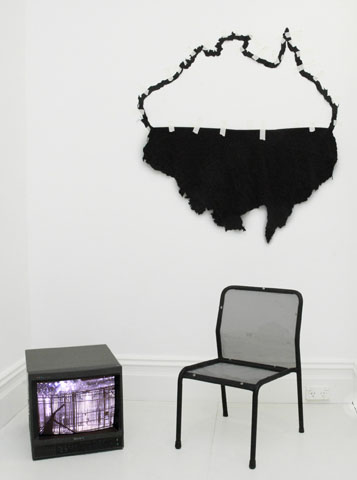 Sydney sees itself as an earthly paradise, a utopia. As an imagined makeover of the whole, utopia is generally thought of as an enlightened social vision with some ardent debate about dimensions. But if utopia has a physical shape, city planning creates it and the visions of our planners and politicians also create disturbing dystopias.

In the aftermath of the Twin Towers atrocity, all cities have to balance responses to security and insecurity, comforts and fears, haves and have-nots. Restrictive ‘green zones’ oppose the idea of cities as haphazard responses to site, whims of style or democratic impulse. In blocks structured like resorts (aerial or flat), gated communities are proposed new city utopias providing comfort only for the haves.

Our segue to segregated neighbourhoods linked by private tollways has been almost unhindered despite the agitation of a few pressure groups. Public space is vanishing, polarised communities are increasing, the poor and minorities are displaced to unwanted suburbs, Sydney drifts on. Utopia has become anywhere and nowhere, the jargon of real estate seduction.

Utopia Limited adapts the Biennale of Sydney’s ‘Zones of Contact’ theme to question its host city, a place where lifestyle is pathological and the charm of the surface rests on uneasy exclusions. These artists engage with the notion of urban landscape as historic archive. A politics of landscape based on entry or exclusion is brought home.

Fiona MacDonald works with unstable hybrid forms and double-takes. Her woven aerial image of an exclusive enclave dramatically reveals the head of a Wandjina spirit formed by the geometry of blue pools and speedboat launch ramps. The James Cook Island construct is in Sutherland Shire which was also home to last Christmas’s ‘Cronulla beach riot’.

Phaptawan Suwannakudt’s opus The Elephant and the Journey (2005) is a quest for a city’s true nature. The artist walks the suburbs collating details of Federation architecture and its Arcadian landscape settings. The ambiguity of the painting installation lies in the marvellous use of Thai high religious painting to contemplate everyday notions of public and private space. Doorways become thresholds announcing strangers.

Deborah Vaughan’s work Island (2003-05) turns suburban utopia on its head, taking the name Villawood — a combination of villa and wood — to represent an educational institution mutating into a militaristic facility. New zones of ‘no contact’ come into being and, quick as a wink, post-war welcome becomes Cold War detention.