Two women, two generations and two disciplines combine in this exhibition to capture history, land, spirit and contemporary Mirriwoong culture of the East Kimberley in painting and ceramics.

Mother and daughter, Peggy and Jan Griffiths from Kununurra in Western Australia, unite in a celebration and contemplation of the counter forces of fire and water, both crucial to the lives of these Indigenous women, still living on their Country in the remote East Kimberley.

Peggy Griffiths says, 'I know my culture is alive ... you see it in the wind as it moves across the country...' (interview with Warringarri Aboriginal Arts 2015.)

About Merran Esson has been making works of art using clay for over 40 years. Her artworks express the contrast between the extremes of country and city. Influences from her rural childhood combine with the urban confines of city life to produce large containers connecting in ways that explore mutual survival.

About Toni Warburton has made work connecting the earth (clay) and water in order to look at what domestic objects can bring to broader discussions on climate for some decades. Her installation water objects – echoes, with Louise Boscacci, (2017, The Cross Art Projects) presented an internal logic based on the artists’ experiences of working with environmental concepts.

About Cross Conversations: are a long-running series of exhibitions about pairs of artists who share independently developed conversations. The idea relates to how artists make work: by collaboration, communication and exchange. 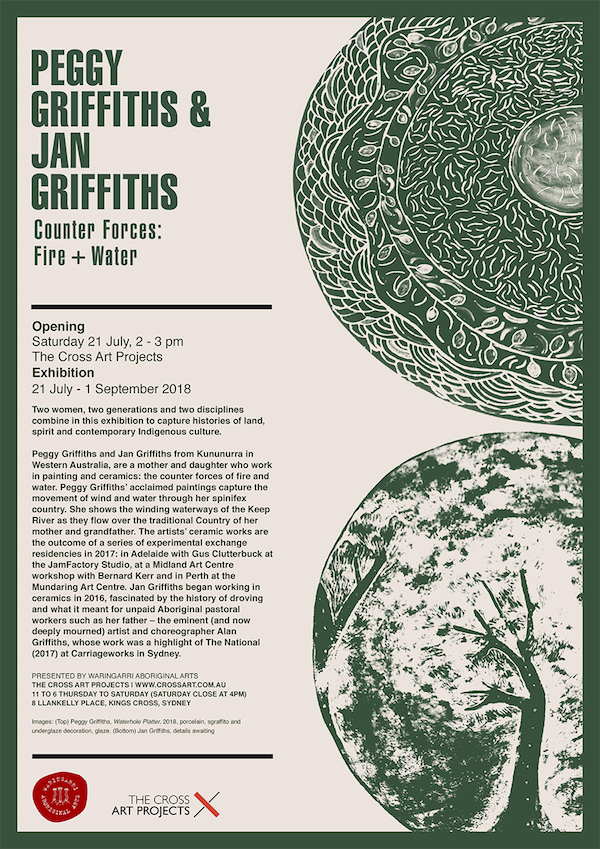 Peggy Griffiths’ acclaimed paintings often depict the ethereal early morning light and the movement of wind and water — the breath of the land that she wakes up to each morning. Peggy Griffiths, who has exhibited for almost three decades, draws her subjects from the traditional Country of her mother and grandfather: Larrgen, the concave curves of Keep River gorge in the wet season as the rains transform her Country, filling billabongs and burgeoning creeks and Jalin (Beasley Knob), a looming and stark presence commanding respect and veneration. Her carefully hand-mixed ochres (earth pigments) convey the translucent tones of light as it plays with her signature motif of jewel-like clusters of spinifex and grass.

Peggy now transfers her delicate imagery onto platters and bowls.  In particular, the artist expresses the celebration of bush tucker through the abundant patterning of Jilynbeng or ‘Bush Cucumber’, often found along the river and creek beds.  This important bush food, along with the water lily, can be cooked and consumed in many ways and is generously found after the wet.

Many have noted the transfer of a dancer's fluidity into the outlines of Peggy Griffiths paintings: moving to express energies seen and unseen. In this way Griffiths imbues her images with the spirit and movement of her Mirriwoong country — as artist and dancer she keeps culture alive for the next generation. Peggy Griffiths is a founding artist of Waringarri Aboriginal Arts and has worked as an artist since 1985 as well as raising five children. She is a backbone of the Contemporary Aboriginal-run visual arts and culture network and has been a chairperson and representative of the art centre for nearly two decades and served as a board member of ANKA. She and her husband the late Mr Griffiths are respected throughout the Victoria River and Kimberley regions of Western Australia.

Jan Griffiths has also learnt from her renowned parents, Peggy Griffiths and the late Mr Griffiths artist founder members of Warringarri Aboriginal Arts in Kununurra, and conveys her parents' stories in a modern style: ochre paintings, porcelain bowls and platters, that examine the cycle of fire and rain that occurs in the Kimberley during the dry and wet seasons; fundamental processes to the health of the living land. Jan Griffiths who was born in Kununurra and studied in Broome, later returned to practice as a journalist and artist.

Jan Griffiths explains: ‘In the early days Aboriginal people knew when to do a burn off, before the rain set in to allow the new shoots of bush life to come alive. Burning off is special and is a traditional way to keep our country alive, strong and full of beauty.  We are one with the country and if we look after the country, the country will look after us.  So by doing a burn off and setting the country alight we are helping to germinate the ground.  When the rain comes and waters this country, it will bear fruit, bush vegetables, wild berries, nuts and many other bush food.  Today we do a bush burn off with the assistance and guidance from the Keep River National Park Rangers.’

Peggy Griffiths, who was born on Newry Station, learnt from her cultural leaders and experienced many of the tragedies affecting Kimberley people as a result of police and welfare hunts, although she escaped capture. Griffiths is fortunate now to live on her country and continue her cultural practices since the station became part of the Keep River National Park, N.T.

The Kimberley schools of contemporary art are internationally renowned especially for the use of ocher paintings, prints and now ceramics. Increasingly new media adds to the mix. The artists’ ceramic works are the outcome of a series of experimental exchange residencies in 2017: in Adelaide with Gus Clutterbuck as facilitator at the JamFactory Studio; at Midland Art Centre Workshop with Bernard Kerr; in Perth at the Mundaring Art Centre. These outcome of these residencies were presented as the spectacular joint exhibition Yirrb/Together at JamFactory Adelaide for Tarnanthi Festival of Contemporary Aboriginal and Torres Strait Islander Arts 2017.

Warringarri was established in the early 1980s by senior artists of the region and, like most community run art centres, is actively engaged in training the next generation of artists through workshops, residencies and community art projects. The broad stylistic tradition known as East Kimberley divides spaces by colour and form and represents both the ground and the elusive skies, cloud forms and sometimes starry skies that often celebrate important dreaming sites and stories and mark the boundaries between Mirriwoong and Gadjerrabeng people. 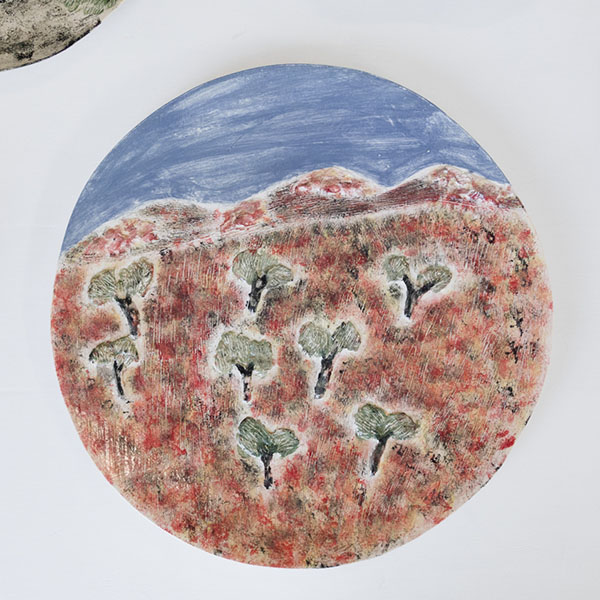 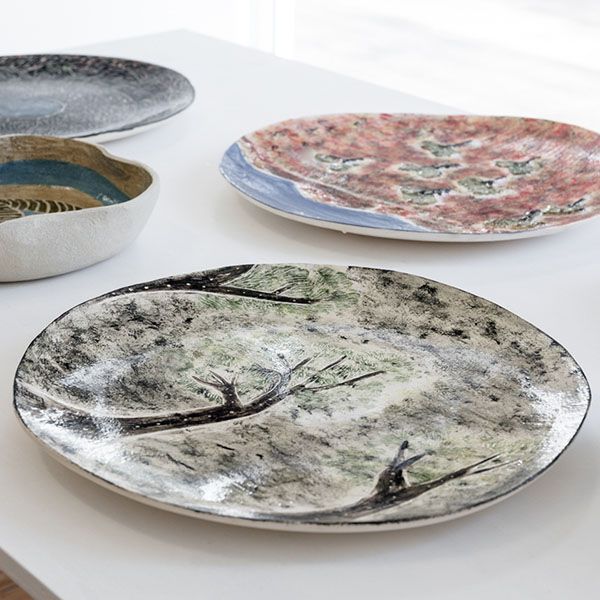 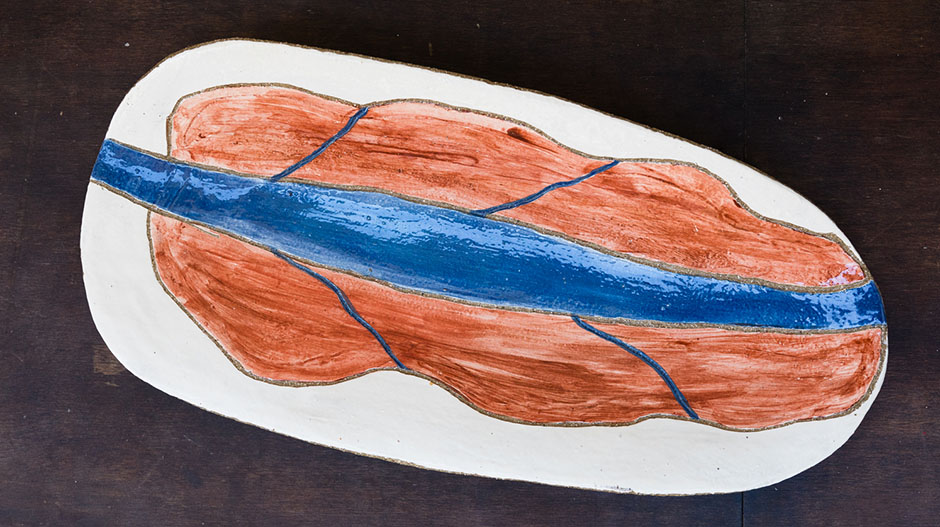 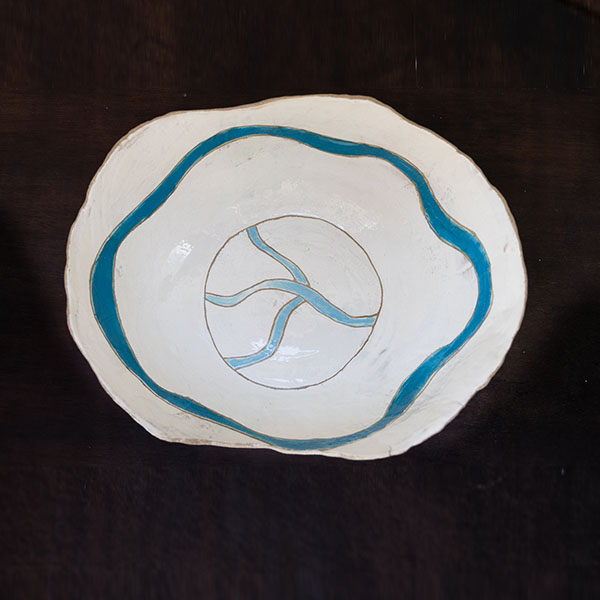 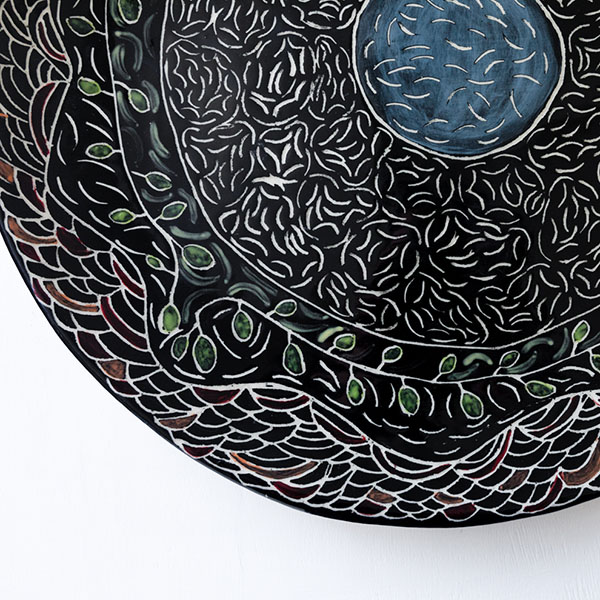 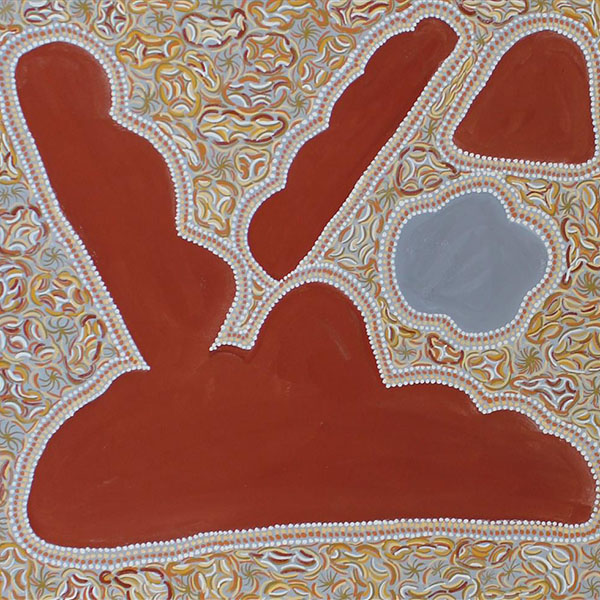 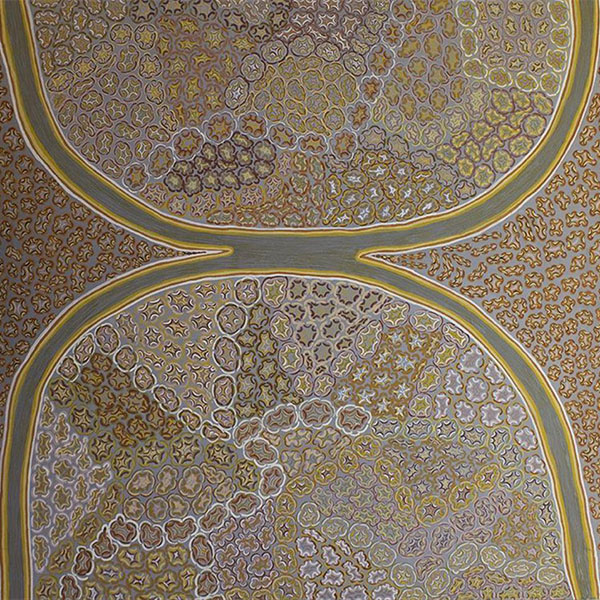 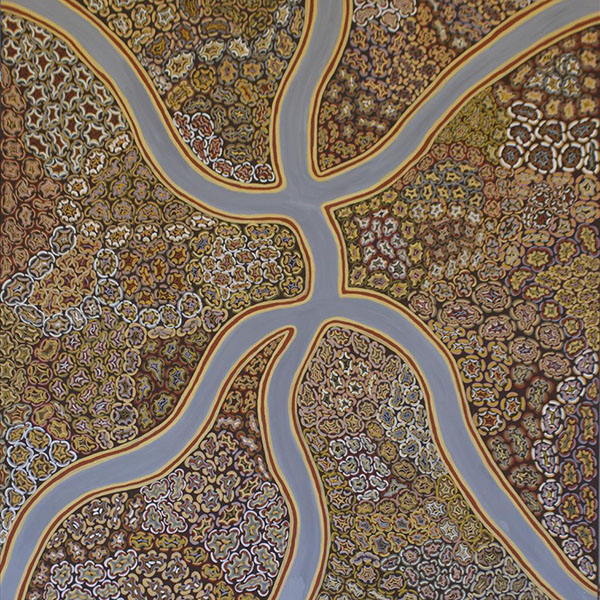 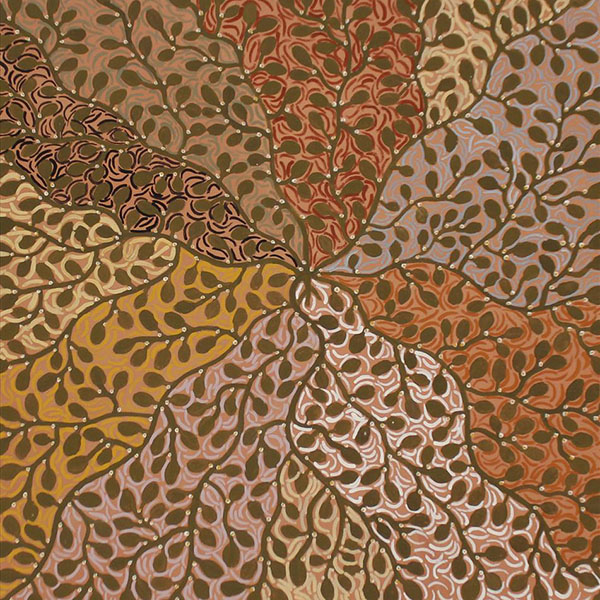 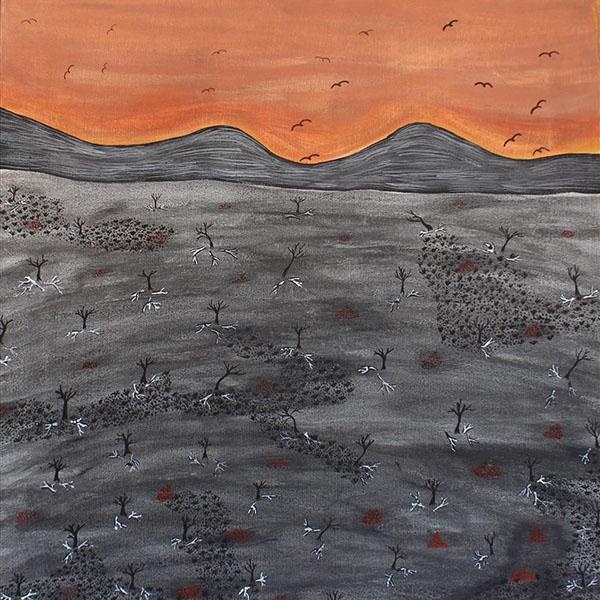 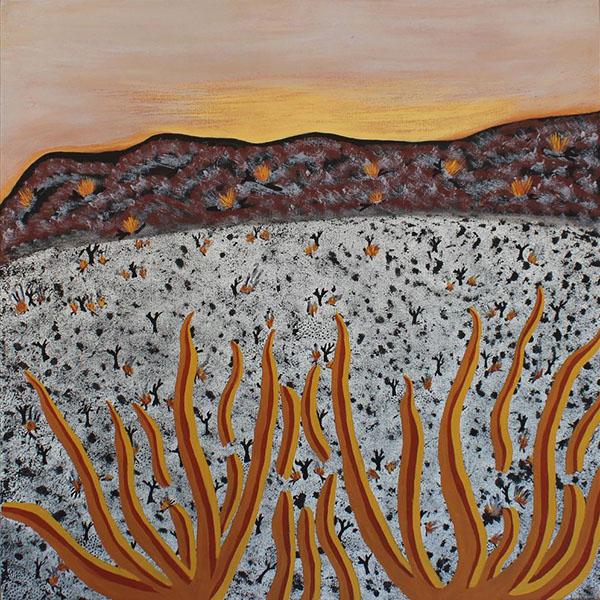 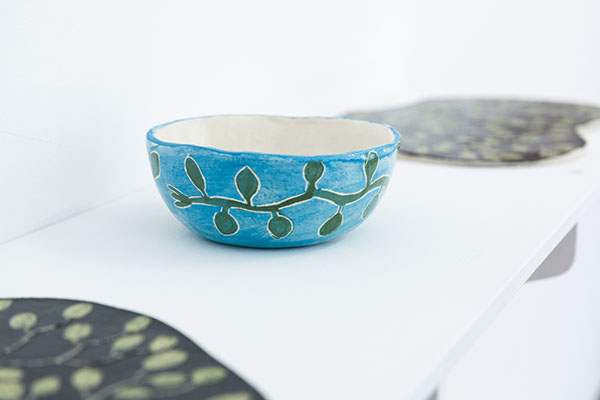 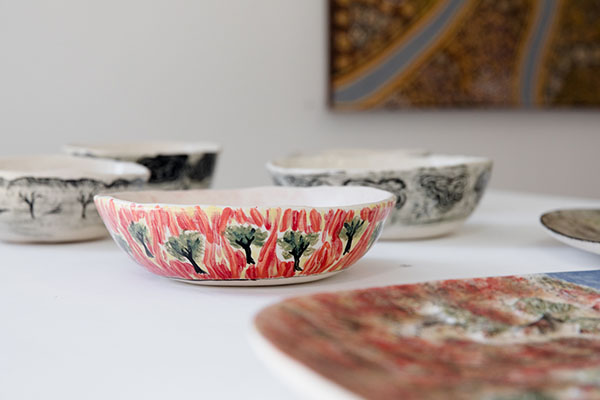 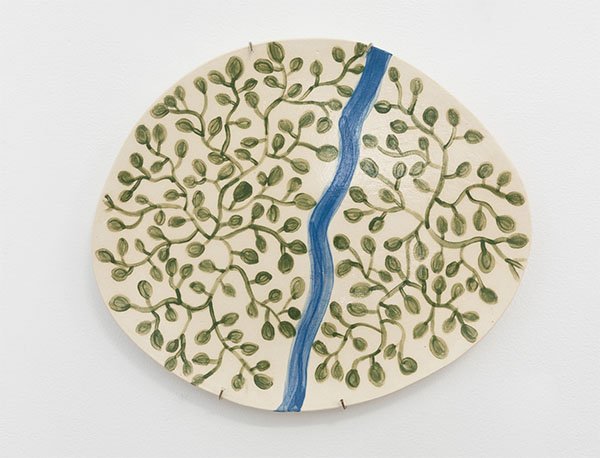 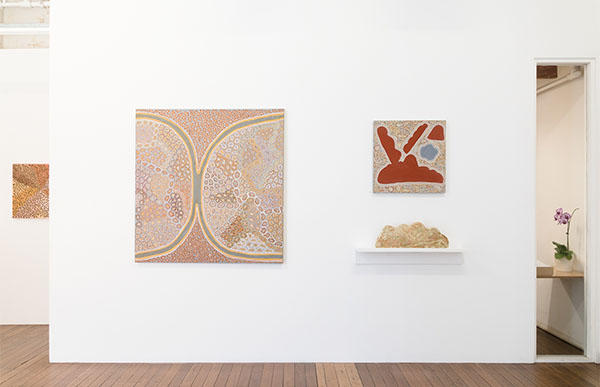 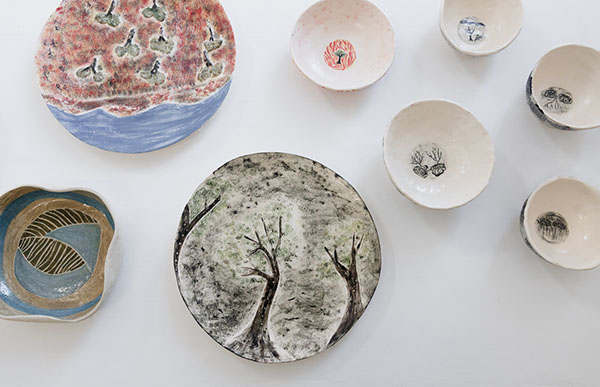 This project is dedicated to the memory of Mr Griffiths: husband, father and eminent lawman, artist, choreographer and a founder of Warringarri Arts. Mr Griffiths' paintings and sculptural installations and performance express the natural and spirit world. His performance piece Bali Bali Balga (31 March 2017) was a highlight of The National (2017) at Carriageworks in Sydney. http://carriageworks.com.au/events/bali-bali-balga-alan-griffiths/