Thursday 5 November at 5 for 5.30. Booking essential (limit of 40), Trades Hall Auditorium.
Tours of Trades Hall and the BLF HQ, TBA booking only.
Presented by: The Cross Art Projects and Sydney Trades Hall Collection

Re/construction brings together artists, one community group and two curators to reread the legacy of Jack Mundey and the Green Bans. Jack Mundey's whole life was one giant spatial project. But he didn't need art to do what he did, he had the context of the union movement. Discussing Jack Mundey's concept of green bans and public space as a 'spatial project' in an art context, is implying a common link between the union movement and art, which makes us aware of the way both offer room for alternative thinking or challenges to mainstream thinking.

Sydney’s Green Bans were the world’s first urban uprising over planning, heritage and housing justice. In 1971, an alliance of builders’ labourers and musicians, wharfies and artists, pensioners and the suburban middle class made history. Mundey secretary of the Builders’ Labourers’ Federation, led his comrades to the environmental barricades in June 1971 alongside a united group of “middle-class women” from Hunters Hill who fought to save a remnant of Sydney Harbour bush. This was the first of a series of important intersectional alliances with communities. It became a new political model. At the time Mundey was a non-doctrinaire communist who later joined the Greens party.

Re/construction re-enacts and re-animates texts and slogans from the unofficial archives that record sit-ins or peace marches for civil rights, gay and lesbian or women’s rights and environment movements. In this case a portion of Jack Mundey's papers donated to the Trades Hall Collection are reviewed at Sydney Trades Hall.

Green Bans embraced other heritage suburbs, most of them working class and many involving saving low-cost or public housing but the Builders’ Labourers’ Federation fought targeted battles for the rights of women, Aboriginals and gays. The establishment Sydney Morning Herald was quick to call them “mere builders’ labourers” and “proletarian town planners”, just conservationists were called "mere housewives". From Kellys Bush onwards, the green ban era was just 4 years until the de-registration of the NSW Builders Labours’ Federation. The additional year dedicates 1975 to their legacy: the renewal of Woolloomoolloo Public Housing, proudly declared a "world leader" for its architecture and consultation model. 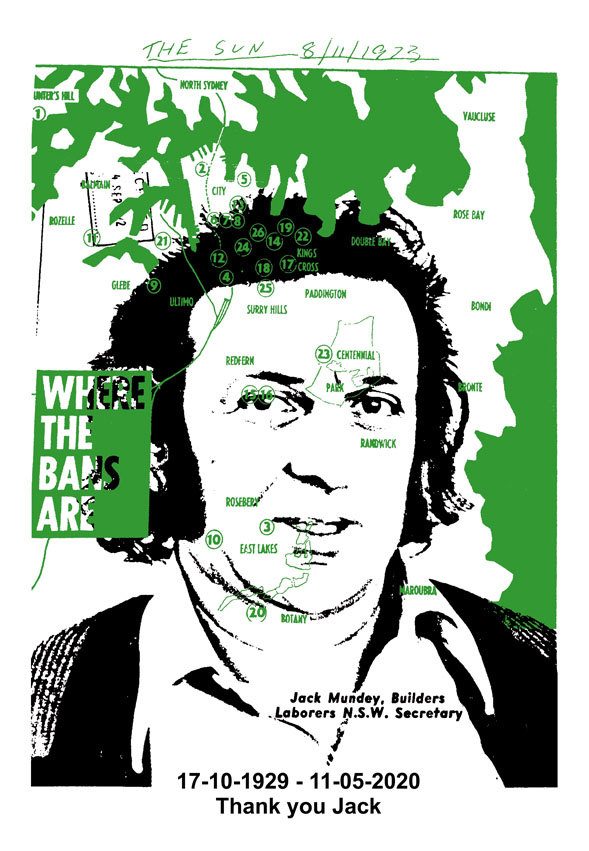 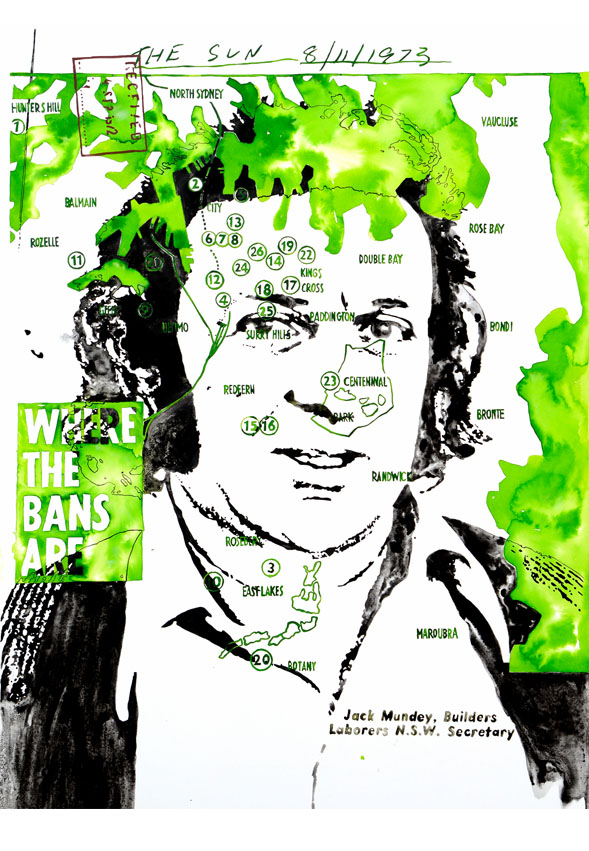 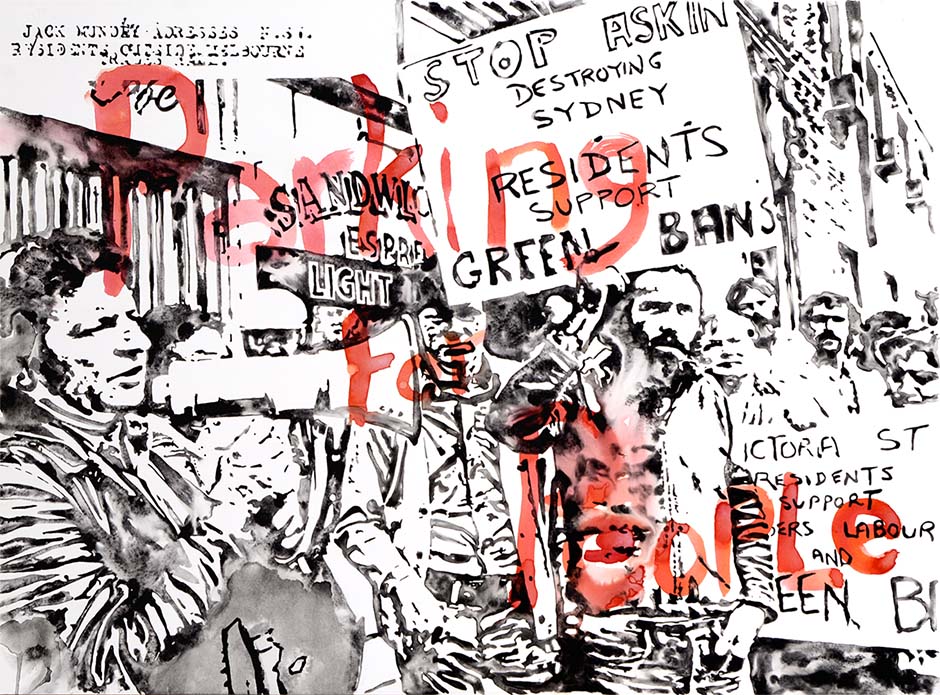 Photographs from Marion Hardman (Marrison) and Peter Manning, Green Bans. The Story of an Australian Phenomenon, Australian Conservation Foundation, 1975. Silver gelatin prints taken in late 1974 and 1975; printed in 1975 otherwise printed in 2011. All are archival mounted on ragboard. Mounted size 406 x 562 mm. The commentary in quotes is from Peter Manning’s 1975 text.

The selection focus is Victoria St and Woolloomooloo Green Bans.

Victoria Street Green Ban: 115 Victoria St was home to Mick Fowler, seaman, musician and unionist and the last tenant of Victoria St. He refused Theeman’s money to move, stayed put and legally contested the eviction. Thugs terrorised him, his property was stolen, his bathroom demolished. His courage rallied others. In 1973 squatters moved into the next-door houses but seven months later thugs, watched by several hundred police, evicted them. In early January 1974, two squatters, Keith Mullins and Con Papadatos, climbed to the top of the chimneys and stayed there while over 100 police and thirty 'controllers’ evicted squatters. They jailed forty people while hundreds demonstrated in the street. They came down after seventeen hours on the chimneys and were arrested. Mick remained as the sole tenant for 3 years. His band Mick Fowler and the Fowl House Five became famous. On 5 May 1976, the day they forced him out, his supporters held a mock funeral outside his home to mark ‘the end of the life of Victoria St’. They buried a coffin in the front yard labelled ‘The Right of Low Income Workers To Live in Victoria St’. 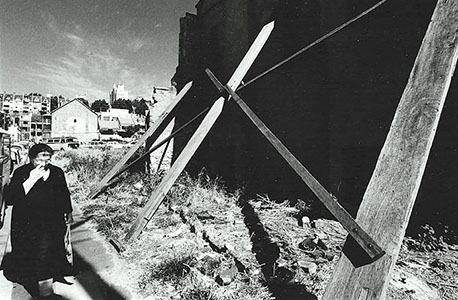 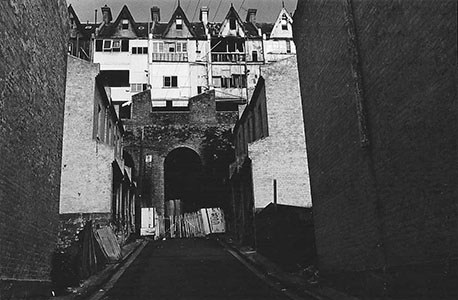 Marian Marrison, Rear of Victoria St from Rowena Place, Woolloomooloo.1975. Peter Manning, "Suspicious circumstances surrounded the death of a young Aboriginal woman in a fire that burnt out the house second on the right on the escarpment". 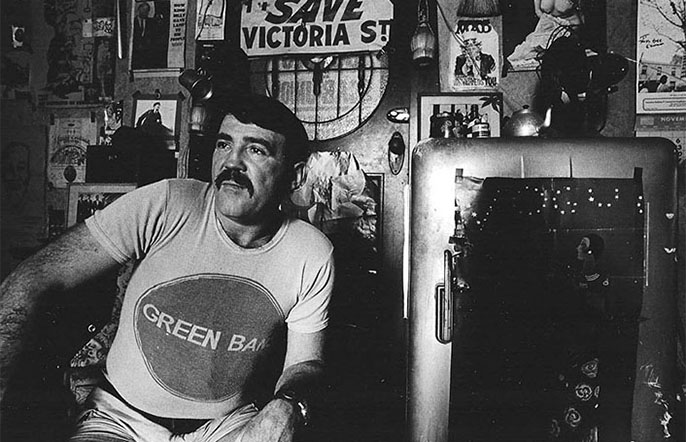 Peter Manning, “When you are “in” Mick Fowler’s home in Victoria St you are in a room about 14 ft square. It is lined with posters, photographs, poems, blow ups, calendars, letters, newsclips, mirrors and memorabilia of any and every kind. All four walls are a living history of Mick Fowler … “ 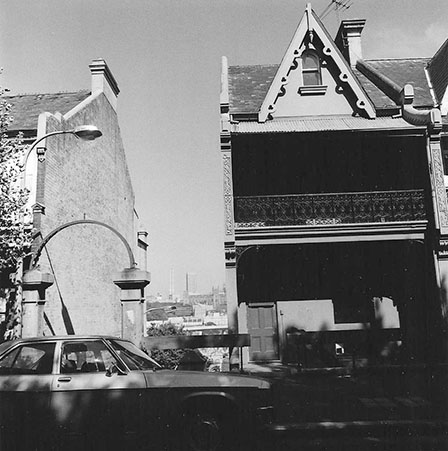 Butler Stairs, joins Victoria St with Brougham St, Wooloomooloo. Looking across The ‘Loo to St Mary’s Cathedral.
After Mick’s death a plaque to his memory was placed on the pillar on the right side.